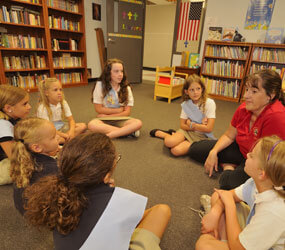 Faith is blossoming at St. Thomas More Academy in Buckeystown, thanks in part to the Little Flower Girls’ Club.

Michelle Anfang started the club at the Frederick County school two years ago to give girls a chance to spend time together while learning about their Catholic faith.
“We’re trying to enforce what we teach them in church and at school,” said Anfang. “The club had a lot of the virtues that we are trying to instill in our children at STMA and complemented what STMA is about.”

Little Flower girls learn about Catholic virtues by studying the lives of female saints, reading Scripture, doing crafts and completing small acts that support those virtues. As they learn, they earn badges that form flowers to show their growing faith.

Marge Lyburn, principal of St. Thomas More Academy, is very supportive of the club.
“It’s just a wonderful opportunity for girls to not only deepen their faith,” she said, “but they also better understand their roles as women. They look to women in the history of the church as role models. They’re trained not only to better understand the women in the history of our faith but also how to apply their characteristics and traits to their own lives.”

Lyburn and Anfang have seen the girls put their faith in action over the last two years.

“They started reaching out to each other,” Anfang said. “I think, especially with girls, we have a tendency to pick each other’s flaws. I’ve seen a lot less of that and more building up of each other. The girls hold each other accountable.”

Since the club formed two years ago, the number of participants has increased from three to 15. This past year, Anfang matched fifth-graders with kindergartners so the girls could work together to learn their prayers and complete their crafts. The older girls excelled at their big sister roles, she said, because of their experience with prayer and reading partners in school, but they also benefited from the pairing.

“They were learning their virtues right along with their little sisters,” said Anfang. “It kept the older girls engaged.”

This fall Anfang will lead the Little Women group with fifth- and sixth-graders, while another woman leads kindergartners through fourth-graders in the girls’ club. The school is also starting a Blue Knights Catholic Club for Boys this coming school year.

Both Lyburn and Anfang recommend the club to other schools.

“I would encourage any Catholic school or Catholic group to consider a Little Flower Girls’ Club,” said Lyburn. “It’s a wonderful opportunity for the girls.”

Anfang said, “Girls see how exciting it is to learn our faith. To instill that at a young age is very important.”