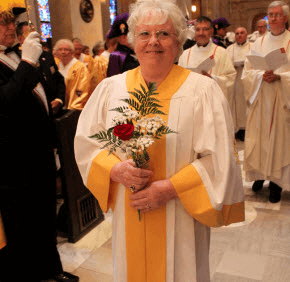 A St. Philip Neri parishioner assumed the highest office of the Catholic Daughters of the Americas July 21.

Anne Nelson, 66, was installed as the national regent at St. Cecilia Cathedral in Omaha, Neb., during the organization’s biennial national convention July 18 to 22.

Nelson has held several local, state and national leadership positions for the Catholic women’s organization, and has been serving as its national regent-elect for the past two years.

“I love the people who are in the organization,” said Nelson, who has belonged to three different courts. “Each group has shown me good, strong Catholic women –women who live their faith, share their gifts and do it with such energy and such joy that it’s just so catchy.”

Retired after 27 years teaching middle school at St. Philip Neri School in Linthicum and 13 years as her parish’s director of religious education, Nelson is a charter member of Court Mother Seton No. 2119, her Linthicum Heights parish’s Catholic Daughter chapter.

The parish’s court is “very active,” said Father Dale Picarella, St. Philip Neri’s pastor. He said the parish is honored to have Nelson named to the organization’s top national position.

Nelson moved to Linthicum in her 20s. She and her husband, Carl, have four adult children and two grandchildren.

Founded in 1903, the Catholic Daughters is one of the oldest and largest Catholic women’s organizations in the United States. Members are involved in a variety of charitable work, from knitting baby hats to building houses for Habitat for Humanity, Nelson said.

Their service also includes charitable fundraising and scholarship programs on local, state and national levels. Members strive “to be helping hands where there is pain, poverty, sorrow or sickness,” according to the organization.

Today the organization has 75,000 dues-paying members in more than 1,250 courts in 45 states and in Puerto Rico, Mexico, Guam and the Virgin Islands.

Nelson has served as Maryland’s state regent, and has been on the national board for 12 years.

“Membership is always a challenge. The women of today are so busy with their own families and their own careers, they really don’t have time for meetings and things like that,” she said. “It seems like organizations across the board are suffering from that.”

The Catholic Daughters began creating campus courts at U.S. colleges and universities about 15 years ago, and Nelson would also like to see that effort grow, she said.

There are currently 15 campus courts across the country, including two in Maryland – one at the University of Maryland College Park and one at the U.S. Naval Academy in Annapolis.

In her position, Nelson hopes to spread the Catholic Daughter’s message of unity and charity, she said.

“I’m hoping that I can lead this organization with a strong faith and strong determination, and with as much energy as I can possibly muster,” she said.

“Wherever Catholic Daughters are, I want them to stand up and to serve the church, to continue to do what they’re doing – to be representatives of what it means to be Catholic women in today’s world,” she added.

Nelson named Father Stephen D. Gosnell, a chaplain at Mercy Medical Center in Baltimore, the Catholic Daughters’ national chaplain. He is the first priest of the Archdiocese of Baltimore to serve in that position.