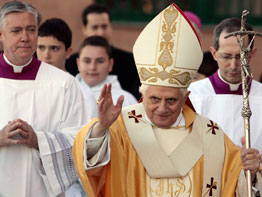 VATICAN CITY – Without the birth of Christ who brought the light of truth to the world, life would be dark and without direction, Pope Benedict XVI said at his last general audience before Christmas.

Born in a grotto in Bethlehem, Jesus has “shown the world the light that lights up our life (and) revealed the way that leads to the fullness of our humanity,” the pope said.

The pope dedicated his talk in the Vatican’s Paul VI hall to “the meaning and value” of the Advent and Christmas seasons.

He said Christians are called to prepare the way for the Lord’s coming by creating a dignified setting “not only in our immediate surroundings but above all in our souls.”

Sometimes the faith and hope that Christ will bring to the world “unfortunately seem too far removed from everyday life today,” he said. Sometimes it seems truth is “too big” to attain and people must make do by trying to find their way in the world, he added.

But living this way turns the world into a place that is “ever more chaotic and even violent, which we see today,” he said.

“If the light of God, the light of truth is turned off, life becomes dark and without a compass,” Pope Benedict said.

“If one does not recognize God became man, what sense is there in celebrating Christmas?” the pope asked. The holiday becomes meaningless, he said.

Christians, therefore, must “reaffirm with deep and felt conviction the truth of the birth of Christ, to pay witness before everyone the understanding of a gift never before dreamed of that is a richness not only for us, but for all people,” he said.

Pope Benedict said the good news must be shared since the world is still thirsting for “this message of reconciliation, solidarity and hope.”

He asked the faithful to reflect on the document on evangelization released Dec. 14 by the Congregation for the Doctrine of the Faith.

The document, which was being prepared when Pope Benedict was still prefect of the congregation, reminds Catholics of their obligation to share with others the Gospel and the full and abundant means of salvation in Christ.

Pope Benedict also reminded people that the Advent season is a time of watchfulness, prayer and conversion. In the last days, Christ will pass judgment on all the living and dead, he said.

Everyone is waiting for justice that will right all the wrongs in the world, he said, but there is no justice without a judge, and that judge is God.

While Jesus will bring about a justice that is not just an abstract sentimentality, Christians must help pave the way by living in obedience to God’s laws, he said.

The pope said the Christian sense of justice means “we ourselves will start to live under the judge’s scrutiny, according to the judge’s criteria.”

“This is the meaning of Advent, of its watchfulness” – to live knowing God is watching us and to prepare ourselves and the world for justice, he said.

The Paul VI audience hall was decorated with a traditional Mexican Nativity scene and a Christmas tree adorned with hundreds of hand-painted ceramic ornaments, flying “centzontle” birds and “tejocote” fruit.

The Nativity scene, its yard-high, hand-carved wooden figures, and the tree ornaments were all provided by the Mexican state of Jalisco to help celebrate the 15th anniversary of diplomatic relations between the Vatican and Mexico. After the general audience, the pope met the government delegation and representatives privately.

The Vatican text of Pope Benedict’s remarks in English is available online at:
www.vatican.va/holy_father/benedict_xvi/audiences/2007/documents/hf_ben-xvi_aud_20071219_en.html.

The Vatican text of his remarks in Spanish is available online at: www.vatican.va/holy_father/benedict_xvi/audiences/2007/documents/hf_ben-xvi_aud_20071219_sp.html.