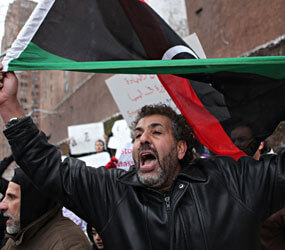 VATICAN CITY – The top church official in Libya said the country’s current unrest was based on legitimate requests by young people for a better future.

Libya, unlike Tunisia and Egypt, has the resources to satisfy those requests, Bishop Giovanni Martinelli, the apostolic vicar of Tripoli, told Vatican Radio Feb. 21.

“The people are asking for some things that are just. And they are fundamental requests of young people: to be able to have a house, a better salary, a job,” Bishop Martinelli said.

Libya is relatively well-off, he said, “and perhaps here is where the crisis arises: Young people see a country that could help them, but that doesn’t.”

The comments came after several days of protests and armed retaliation by the forces of Libyan leader Moammar Gadhafi. Several hundred people were reported killed in the skirmishes, and parts of the country were said to be under opposition control.

Bishop Martinelli said it was difficult to foresee a resolution of the crisis. He said the Catholic Church, which represents a tiny minority in Libya, wanted above all a “form of reconciliation that allows the Libyan people to have what is just.”

The important thing now is to reopen dialogue between the factions, he said.

He said Catholic personnel and institutions were not experiencing particular problems during the unrest, but he added that he had been unable to communicate for days with two communities of women religious working south of Benghazi, the center of the protests.