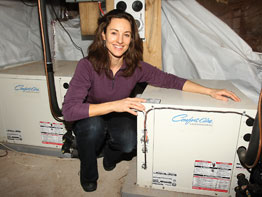 Chris and Susie Hill’s ultimate goal is to “go off the grid,” using no power generated from fossil fuels, and drastically shrinking their carbon footprint. The Hills are well on their way.

While the couple has always been close to nature, their quest to reduce their environmental impact took off nearly 12 years ago, when they decided to refurbish their 18th-century log house north of Frederick.

They purchased a nearby abandoned house and used its material to upgrade and expand their log house. Walls, baseboards, hardwoods and anything else that could be salvaged was reused.

“It’s really the house that got us into it,” Mrs. Hill said. “We recycled an entire house.”

The effort to reduce their carbon footprint has led the Hills and their three children – Katy, Liza and Grady – to install energy-efficient appliances, use compact fluorescent light bulbs and replace their oil-burning furnace with a geothermal heating system.

“We don’t do it (live modestly) perfectly, but we do what we can within our time frame,” said Mrs. Hill, who has a degree in horticulture from the University of Maryland.

“It (the geothermal unit) reduced our oil bill by $250 a month. For us, this system will pay for itself in less than four years, but we really did it because it was the right thing to do.”

With three acres, the Hills had enough property to install a closed-loop geothermal unit, which uses heat below ground to power the heating and cooling units of the home.

“Not everybody can do this. We’re lucky,” said Mrs. Hill, who with her family attends St. Peter the Apostle in Libertytown. “There are so many other things people can do. Little things matter.”

Energy experts agree that most homeowners don’t have to make a major investment to see a reduction in their electricity usage and a subsequent savings.

“There are some very simple things you can do – the key is to get yourself to actually do them,” said Todd Larsen, corporate responsibility director for the sustainable economy organization Green America, formerly Co-Op America. “The simplest thing is just turn out your lights when you’re not in the room.”

Web sites, such as Baltimore Gas and Electric’s www.BGESmartEnergy.com and www.aceee.org, offer simple tips on ways to cut down on energy usage, including using cold water to wash clothes, letting dishes air dry in the dishwasher and using major appliances later at night.

“It’s about picking the ones (actions) that work for you,” Mr. Larsen said. “Everyone wins when you use less energy in the home.”

With more of an investment, homeowners could realize even bigger savings. The Maryland Energy Administration offers a link to state trained and certified contractors who perform complete home-energy analyses and improvements through its Maryland Home Performance program.

According to BGE, 45 percent of a homeowner’s energy costs go toward heating and cooling their house. Using energy-efficient windows and sealing leaks around doors, windows and vents can make a big difference.

While major upgrades, such as installing wind turbines, geothermal heat systems, solar-powered attic fans, solar hot water systems and solar photovoltaic panels require a substantial investment, there are a series of rebates and tax incentives available, according to officials.

“It sometimes can bring costs down as much as 60 percent depending on your location,” said Tim Grahl, Mid-Atlantic direct sales representative for Chesapeake Solar in Jessup. “It’s a significant impact.”

The next step for the Hills, who are passing down their enthusiasm for protecting the environment to their children, might be a wind turbine, solar panels on the barn or a hybrid vehicle when they replace their next car.

“We’re taking it slowly, gradually, bit by bit,” Mrs. Hill said. “You do what you can because it’s the right thing to do.”