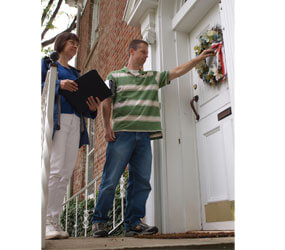 VATICAN CITY – A new Vatican council is tackling an old task: bringing God to the world in new ways.

The Pontifical Council for Promoting New Evangelization is just a year old, but “it is one of the most important fruits of the Second Vatican Council,” said the council’s president, Archbishop Rino Fisichella.

“The dicastery doesn’t spring from nothing. It springs from groundwork laid the last 50 years – preparation for making a new impact, a new culture, a new way to present the church to the world,” he told Catholic News Service.

Even though the term “new evangelization” doesn’t appear in conciliar texts, he said, the concept is well apparent and gets further fleshed out in Pope Paul VI’s 1975 apostolic exhortation on evangelization, “Evangelii Nuntiandi.”

New evangelization stems from the particular challenges facing the church in bringing the Gospel to those already familiar with it, he said.

“It’s easier to proclaim Jesus Christ to those who have never heard of him,” said the Italian archbishop.

“The challenge is much more difficult, much bigger, to have to talk about the faith, the need for faith in Jesus Christ to people who presume to have the faith or to those who have left (the church) for reasons including the behavior of people of the church.”

The test is knowing “how to reach everybody by means of a credible style of life as well.”

Pope Benedict XVI has been determined to confront the increasing secularism of the modern world.

A concrete sign of that is the new council, which he established in June 2010. Just a few months later, he announced that “new evangelization” would be the theme for the 2012 world Synod of Bishops.

The pope’s missionary prayer for August asks that Christians in traditionally Christian countries “rediscover the freshness and enthusiasm of their faith.”

To spearhead this renewed mission, the pope chose a leading theological adviser to the Vatican. Archbishop Fisichella taught fundamental theology for 20 years at the Pontifical Gregorian University and was rector of Rome’s Pontifical Lateran University before he served as president of the Pontifical Academy for Life for two years.

His books and lectures have been about how to present Christianity to today’s world, especially in using language that makes the truth of the Gospel easily understood in today’s cultures, he said.

However, he said, after years of developing his ideas as a professor, “now I have to be able to put them into practice.”

He has built a simple, two-pronged plan of attack: help build identity so Catholics learn what it means to be a Christian today, and re-instill a sense of belonging to the church.

Many Christians lack basic knowledge of the faith, he said, and one of the reasons is that catechetical instruction typically stops after the sacrament of confirmation in the teen years.

“Faith also needs to be studied,” even as an adult, he said, so people know not only what the faith teaches, but how to live that faith in today’s world with today’s challenges.

“If someone doesn’t know the fundamental tenets of the faith, it’s difficult for that person to know who he is” and what being Catholic means, he said.

Building community and a sense of belonging to the church are also tied to identity, he said, since “there can be no full Christian identity if it’s not in reference to the community, and there can’t be a community made up of people who are weak, lacking identity.

“So we need to know the faith, know who we are in the world and know our tradition in our culture to build up a Catholic identity,” which is also built up in relationship with other Catholics in both good times and bad, he said.

Homilies are also an important way to evangelize, he said, especially when they are delivered during a Mass that may be attended by many lapsed or non-Catholics, such as weddings, baptisms and funerals.

“If the priest is able to give a message that is both intelligent and able to touch people’s hearts, it is a very important example of new evangelization,” the archbishop said.

The council will launch a pilot project called “metropolis mission” during Lent 2012 in 12 different European cities “because the Lord sent 12 in the beginning” to evangelize, he said.

The bishops of the cities will be united around implementing the same initiative in ways that are unique to the dioceses.

The Lenten programs will include putting the spotlight on the sacrament of reconciliation because “new evangelization demands knowing the truth about oneself,” he said.

This truth is found “where you feel welcomed, loved, and forgiven,” he said; and it’s the sacrament of confession where people come face to face with their sins and contradictions and yet experience God’s mercy and love.

Unexpectedly, the most daunting challenge for the archbishop so far has been finding a U.S. priest to fill the office’s English section.

He said he wants the staffer to come from the United States, “because we need an expert on the church and U.S. culture.”

Though it has crossed his mind to choose a lay person or religious instead, he said a priest would be a more visible sign “representing the presence of the bishops’ conference,” since the job entails having a close working relationship with bishops and bishops’ conferences.

However, priests are a precious resource, he said, “and they’re not easy to give up.”