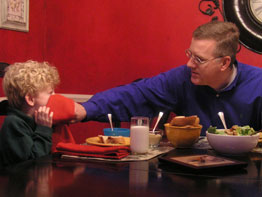 WASHINGTON – It’s not always easy to bring family members together for a tasty, nutritious and affordable meal. When Lent comes around, the need for meatless Fridays and the hope of teaching children about why Catholics fast and abstain from meat can make meal planning seem nearly impossible.

But two Catholic mothers in different parts of the country have a few solutions to offer.

“I think it’s very important that we do observe Lent as families, even though it’s not doctrinally required below a certain age,” said Lisa Hendey of Fresno, Calif., the mother of two teenagers and founder of CatholicMom.com, a Web site that offers a variety of free resources to Catholic parents.

Amy Heyd, a mother of three from Cincinnati, says meals can be a teaching moment at any time of year. She wrote her new book, “Saints at the Dinner Table” (St. Anthony Messenger Press, $19.95), in part to bring lessons from the early days of the church into the lives of her children today.

“I’m constantly trying to find ways to teach them about my faith and teach them to make good choices in life,” Heyd said. “They need to keep relearning (about good choices) until it’s part of who they are.”

Ms. Hendey said it is important for Catholic children to know not only what they are expected to do during Lent, but why. “We link it to an act of service,” she said of the family’s simple, meatless meals on Fridays in Lent.

The money saved by keeping a meal simple or not going out to dinner as a family is donated to Catholic Relief Services’ Operation Rice Bowl or the Society of St. Vincent de Paul, she said.

“Kids can understand that giving” when parents say, “We’ll take this and use it to help someone else who is not as blessed as we are,” Hendey added. “It’s not so much talking about what we’re doing without, as it is what we’re doing to help other people.”

Ms. Heyd – whose children are in third, sixth and eighth grades – sometimes makes it a family project during Lent to take a meal to a needy friend or to a local soup kitchen or Ronald McDonald House. They usually don’t do it on Fridays, however, so that they can provide “a good hearty meal” such as the meatball tortellini soup featured in Ms. Heyd’s book in a chapter on St. Margaret of Scotland.

St. Margaret, queen of Scotland, often welcomed groups of commoners into the royal castle during Advent and Lent, providing them with “magnificent feasts,” Ms. Heyd said. For that reason, the chapter on St. Margaret also includes a recipe for chocolate mint cake with vanilla cream – hardly appropriate for a sacrificial meal during Lent, Ms. Heyd noted with a laugh.

Ms. Hendey said her Friday meals during Lent sometimes focus on a concept rather than a recipe. She might offer her teenagers the fixings for “build your own veggie pizza,” a baked potato bar or fondue.

CatholicMom.com, the Web site Ms. Hendey founded in late 1999 as “my personal response to Pope John Paul II’s call to live out the faith” during the jubilee year, offers dozens of meatless recipes contributed by visitors to the site.

The site also includes downloadable religious education materials for all ages, ranging from word searches to coloring pages to lesson plans geared to a variety of feast days, sacraments or Bible events. Ms. Hendey records a weekly podcast with a Catholic author, entertainer or personality and more than two dozen columnists offer their views on a wide range of topics.

She said CatholicMom.com began as “a hobby” that generated barely enough in advertising to pay its own Web hosting fees. Ms. Hendey, whose husband, Greg, was not Catholic, also wanted to strengthen her own knowledge in “not single-parenting, but single-faith-parenting” their two boys.

The site now receives “hundreds of thousands of hits every month” and generates enough income to give Ms. Hendey a small salary. She’d like to see it expand enough to pay her columnists, who all contribute their work at no charge, but she doesn’t want it to grow much beyond that.

“It’s not a business, and I don’t intend for it ever to be a business,” Ms. Hendey said.

But the years since the founding of CatholicMom.com also have brought changes in the Hendey household. Six years ago, 17 years after Lisa and Greg were married, he became a Catholic.

“That was such a blessing for our family,” she said. “I still get a lump in my throat every time I see him go to Communion.”