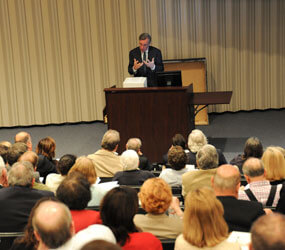 TOWSON – John Hugh Garvey is convinced that religious freedom will be the most important issue facing the Catholic Church in the United States over the next half century.

“This is so because our culture is evolving in ways that are indifferent and sometimes even hostile to religion,” said Garvey, president of The Catholic University of America in Washington, D.C.

The sexual abuse crisis has particularly wounded the Catholic Church, he said, contributing to a loss of moral authority. In the past decade, he said, legal restrictions aimed at the church garnered a sympathetic hearing. The church now finds itself in the position of religious minorities, he said.

“In fact, its position is worse,” Garvey said, “because when a state like the Commonwealth of Massachusetts enacts laws that are aimed at the church, it may not seem discriminatory to people because a majority of the legislators who passed the laws were baptized as Catholics.”

Religious people have traditionally sought shelter in the Constitution, he explained, “and that’s an area where the shade has been diminishing in the last decade.”

Garvey spoke May 10 at the inaugural Lecture on Religious Liberty, hosted by Archbishop Edwin F. O’Brien at Calvert Hall College High School in Towson. The gathering attracted an estimated 150 people.

Garvey focused much of his talk on the 1990 Supreme Court ruling, Employment Division v. Smith. The ruling held that the First Amendment protects religious actors against discrimination, Garvey said, but not against laws that are neutral and generally applicable.

David Kinkopf, an attorney with Baltimore-based Gallagher, Evelius and Jones who represents the Archdiocese of Baltimore, argued that the Smith ruling is inadequate in protecting church liberty.

“If Congress passed a general law reinstating Prohibition – absolutely outlawing alcohol (even for sacramental use),” Kinkopf said, “Congress would be free to do that under the Smith doctrine. It could criminalize something that’s so central to our sacramental life.”

“Time and time again,” he added, “this neutrality isn’t a sufficient protection of religious liberty.”

Garvey and Kinkopf pointed to several recent challenges to religious freedom. One was the recent law passed by the Baltimore City Council that required pro-life pregnancy centers in the city to post signs indicating that they did not provide abortion or birth control. Similar signs were not required of Planned Parenthood requiring that organization to state what services it didn’t provide.

Archbishop O’Brien challenged the law in federal court as a violation of the First Amendment.

U.S. District Court Judge Marvin J. Garbis ruled Jan. 28 in Baltimore that it is unconstitutional to require pro-life pregnancy centers to post signs with language mandated by the government The judge wrote that whether a provider of pregnancy-related services is “pro-life” or “pro-choice,” “it is for the provider – not the government – to decide when and how to discuss abortion and birth-control methods.”

The case is making its way up the federal courts.

“We ought to be concerned about the government – under threat of criminal prosecution – forcing private speakers to provide a government-mandated message,” Kinkopf said.

Kinkopf said land-use cases are another area where religious liberty can be at risk. When the Archdiocese of Baltimore sought to demolish an apartment building to make way for the Pope John Paul II Prayer Garden, it ran into difficulty with historic preservationists. If the city would have failed to allow the church to demolish the building, Kinkopf said, it would have violated the Religious Land Use and Institutionalized Person Act. The city allowed demolition to proceed.

“The case really turned on the question of whether there was a substantial burden on the religious exercise of a person – including a religious assembly or institution,” Kinkopf said.

Garvey cited other cases where religious liberty runs into laws that compel religious institutions to do something against their beliefs or obey laws that apply to everyone. Examples include abortion counseling at Catholic hospitals, gay adoption and contraceptive coverage in health insurance.

Archbishop O’Brien noted that Pope Benedict XVI has spoken out strongly on the importance of defending religious liberty around the world – stipulating that the right to religious freedom should be viewed as an agent of the fundamental dignity of every human person.

“Let’s uphold this right through the work of our own vocations and preserve it for future generations,” Archbishop O’Brien said.