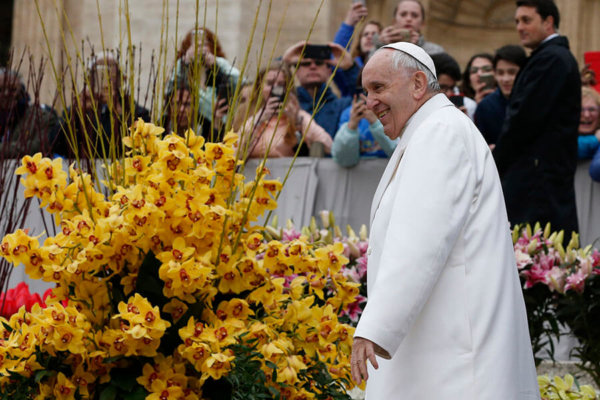 VATICAN CITY (CNS) — The final words at Mass — “Go in peace” — are an invitation to Christians to proclaim God’s blessings through their lives, not an opportunity to go outside and speak ill of others, Pope Francis said.

Through the Eucharist, Jesus “enters in our hearts and in our flesh so that we may express in our lives the sacrament we received in faith,” the pope said during his weekly general audience in St. Peter’s Square April 4.

“But if we leave the church gossiping, saying, ‘Look at this one, look at that one,’ with a loose tongue, the Mass has not entered into my heart. Why? Because I am not able to live the Christian witness,” he said. “Every time I leave Mass, I must leave better than when I entered, with more life, with greater strength, with a greater desire to give Christian witness.”

An estimated 20,000 pilgrims gathered in St. Peter’s Square dressed in bright ponchos and holding umbrellas to shield themselves from the cold rain.

After circling the square in his popemobile, the pope made his way to the stage, which was still adorned with flowers from the Easter celebrations.

Flowers, the pope said, are a symbol of the joy and happiness of Jesus’ resurrection when “our justification blossomed, the holiness of the church blossomed.”

Wishing the faithful in the square a happy Easter, Pope Francis also had a special greeting for his predecessor, retired Pope Benedict XVI.

In his main talk, the pope focused on the closing rites of Mass, finishing a series of audience talks on the liturgy.

As the Mass ends, he said, “the commitment of Christian witness” begins at home, at work and any time a Christian interacts with others; the idea is to “become Eucharistic men and women.”

“What does this mean?” the pope asked. “It means letting Christ act through our works: that his thoughts become our thoughts, his feelings become our feelings, his choices become our choices.”

Departing from his prepared remarks, Pope Francis said that by “mortifying our selfishness,” Christians create a greater space for the Holy Spirit to act in their lives and “widen their souls” after receiving the Eucharist.

“Let your souls be widened! Not these narrow, closed, small, selfish souls. No! Great souls, big souls with great horizons,” he said.

The fruits of the Eucharist, the pope added, are “destined to mature in daily life” and grow like a grain of wheat through “our good works, attitudes and becoming like Jesus.”

In receiving the Body and Blood of Christ, Pope Francis said, men and women are called to “pass from the flesh of Christ to the flesh of our brothers and sisters,” especially the poor where Jesus “awaits to be recognized, served, honored and loved by us.”

“May our lives always be in bloom, like Easter, with the flowers of hope, of faith, of good works,” he said. “May we always find the strength for this in the Eucharist, in our union with Jesus.”