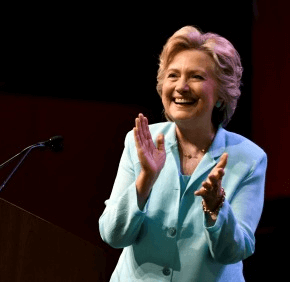 By Julie Asher
Catholic News Service
WASHINGTON – The chief liaison to Republican nominee Donald Trump for Catholic issues said that emails released Oct. 11 by WikiLeaks “reveal the depths of the hostility of Hillary Clinton and her campaign toward Catholics.”
The emails illustrate “the open anti-Catholic bigotry of her senior advisers, who attack the deeply held beliefs and theology of Catholics,” said liaison Joseph Cella, who is the founder of the National Catholic Prayer Breakfast.
On Oct. 12, Catholic News Service sent an email to the Clinton campaign seeking comment, but there was no immediate reply. A Time magazine story published online late Oct. 12 said Brian Fallon, a Clinton spokesperson, responded to the charges of anti-Catholicism, calling it a “faux controversy” courtesy of a WikiLeaks hack.
Cella was referring to a leaked email chain with the subject “Conservative Catholicism” from 2011 in which Jennifer Palmieri, a Catholic herself, who is now Clinton’s communications director, and John Halpin, a fellow at the Center for American Progress, discussed Rupert Murdoch, CEO of News Corp, a media conglomerate that includes Fox News in its holdings, and Wall Street Journal managing editor Robert Thomson having had their children baptized as Catholics.
“Many of the most powerful elements of the conservative movement are all Catholic — many converts. … It’s an amazing bastardization of the faith,” Halpin wrote in an email to Palmieri and John Podesta, Hillary’s campaign chairman who was chief of staff to President Bill Clinton and has been a counselor to President Barack Obama. “They must be attracted to the systematic thought and severely backwards gender relations and must be totally unaware of Christian democracy.”
Halpin added: “I imagine they think it is the most socially acceptable politically conservative religion. Their rich friends wouldn’t understand if they became evangelicals.”
Podesta, himself a Catholic, did not respond.
Cella said these advisers in “viciously mocking Catholics as they have, turn the clock back to the days of the 20th-century “No Catholics Need Apply” type of discrimination. Hillary Clinton and her campaign should be ashamed of themselves and should immediately apologize to all Catholics and people of goodwill in the United States.”
In another leaked email to Podesta, Sandy Newman, president of Voices for Progress, said:”This whole controversy with the bishops opposing contraceptive coverage, even though 98 percent of Catholic women, and their conjugal partners, have used contraception, has me thinking. … There needs to be a Catholic Spring, in which Catholics themselves demand the end of a Middle Ages dictatorship and the beginning of a little democracy and respect for gender equality in the Catholic Church
“Is contraceptive coverage an issue around which that could happen?” she asked in her Feb. 10, 2012, email.
Copyright ©2016 Catholic News Service/U.S. Conference of Catholic Bishops.
See also:
As outrage over lewd comments piles up, Trump struggles among Catholics
When the choice is Clinton or Trump, what’s a Catholic to do?
PrevNext