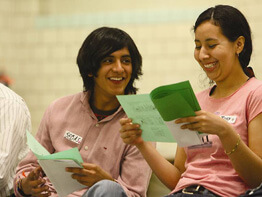 Some 50 Latino immigrants kicked off Cinco de Mayo at Our Lady of Pompei, Highlandtown, May 5, concentrating on their Catholic faith, which they pray will bring them a better life in the United States and merge their traditions with American culture.

The mostly 20-something crowd who gathered for a ‘Convivencia,’ discussed the hardships they face as immigrants and how their parishes help them build a future in their adopted land.

“There are vices all around us and some people are using them to cope with how alone they feel,” said Layaro Romero, a parishioner of St. John the Evangelist, Columbia, and an El Salvador native who has been in this country about two years. “Instead of trying to help those people, we often just point fingers at them.”

Father Antonio Velez, associate pastor of St. John the Evangelist, Columbia, rallied the group by having them recreate the sounds of guitars, trumpets, accordions and drums to harmonize familiar music.

The exercise, said Father Velez, a Spanish-speaking priest from Colombia, represented the talents each individual can contribute to create a collective brilliance.

This gathering was the first of monthly gatherings hosted by the newly formed Hispanic Young Adult Archdiocesan Council, a body of young adult Latino representatives from various urban and county parishes.

The group was formed to help Baltimore area Hispanics collaborate on events and activities and enhance communication between the community and the archdiocesan division of youth and young adult ministry.

Father William C. Rickle, S.J., a professor at Loyola College in Maryland, Baltimore, told the Latino adults the clergy are concerned that many Hispanic immigrants don’t continue their education past elementary school, have low-paying jobs and are at risk of contracting sexually transmitted diseases.

“Education is the key to success in this country,” Father Rickle said. “I realize that is complicated by the legal status of many immigrants, but I want to urge you all to take advantage of every educational opportunity open to you, and to your children.”

Each person is born with holiness and church is a place where we are reminded of the goodness that God instilled in us, said Mark Pacione, director of the Division of Youth and Young Adult Ministry.

“Cardinal (William H.) Keeler wants us to do all that we can to welcome all young Hispanic men and women into our Catholic community,” Mr. Pacione said. “He wants you all to know the church is here to protect you from the hurts that often come with being an immigrant and that we want to help you get adjusted to our culture.”

Following the three-hour Convivencia, many participants joined hundreds of others who gathered in Fells Point for the Cinco de Mayo Festival, which began with a ceremonial proclamation by Maryland Lt. Gov. Anthony Brown.