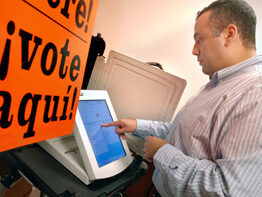 WASHINGTON – As pollsters and political analysts try to predict the outcome of the election, Latino voters have become a target for intense attention – by tea-leaf readers as well as the candidates.

Latinos have been swing voters in the last several elections – with majorities supporting Democratic Vice President Al Gore in 2000 and Republican President George W. Bush in 2004.

With population growth, Hispanics’ percentage of the electorate has steadily risen. Frustration over the failure of Congress to pass a comprehensive immigration reform bill also has led many longtime legal permanent residents to become naturalized citizens and register to vote for the first time. A nationwide naturalization and voter registration campaign waged over the last two years has made those steps easier for people and helped keep up interest in voting.

Immigration, as well as concerns about the economy and the war, may turn Latino evangelicals into the key to that swing vote.

Political scientist Matt Barreto of the University of Washington predicts that more than 9 million Latino voters will turn out this fall, compared to 7.6 million in 2004. Hispanics will make up about 15 percent of voters nationwide this year.

That’s made them a particular target of the presidential campaigns, which have waged fierce battles for their vote in Spanish-language media, much of it focused on immigration policy. Both campaigns consider Hispanic voters important to winning in battleground states such as New Mexico, Nevada and Colorado.

The National Council of La Raza estimates that 1 million new citizens have become registered voters since the 2004 election.

The far-reaching campaign was sponsored nationally by major media outlets including Univision, the Spanish-language TV network, and ImpreMedia, the largest Hispanic newspaper publisher in the U.S., as well as civil rights groups such as the National Council of La Raza. On the local level, churches and community organizations have helped get out information and managed voter registration.

One week this fall, nearly 1 million copies of Spanish-language newspapers across the country included a voter registration form and instructions on how to file it.

What will bring all those new voters to the polls is another matter.

That’s what the Gamaliel Foundation has been focusing on, said Laura Barrett, national policy director for the national faith-based community organizing network. They’ve been working on helping voters become aware of issues that are affected by elections, such as housing, transportation and immigration policy, she said.

Nonpartisan public meetings, follow-up phone calls, help getting to the polls and information such as what ID they’ll need to vote are the kinds of help Gamaliel is offering in many places, Ms. Barrett said.

Response has been unexpectedly strong, she said. For instance, “one community meeting in South Bend, Ind., drew 700 people, all immigrants, about half of them children,” she said in an interview with Catholic News Service.

Gaston Espinoza, associate professor of religious studies at Claremont McKenna College in California, said evangelical Latinos have been much more likely to shift their votes from one party to another.

Abortion and same-sex marriage were among the issues that drew evangelical Latinos to Bush in 2004, Espinoza said, but this year they’re placing a higher priority on immigration and economic concerns.

He said about 50 percent of Hispanic Catholics say abortion and same-sex marriage are of high importance in their voting decisions, compared to about 75 percent of Protestant Latinos.

“Latinos tend to take a holistic approach to voting,” Espinoza said. “They don’t tend to be one-issue voters.”