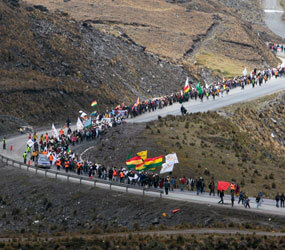 LIMA, Peru – Most of the environmental battles Brother Paul McAuley fights seem endless, mainly conflicts between indigenous communities and loggers operating on their lands or oil companies that have spilled toxic substances into their waterways.

Sometimes, however, there’s a victory. In mid-October, the Peruvian government overturned a law that would have allowed water from one of the main tributaries of the Amazon River to be diverted to irrigate export agriculture operations on Peru’s desert coast, a measure critics called a political-patronage boondoggle.

“We’re not sure it’s dead, in the sense that it will never come back, but for the moment it has been put on hold,” said Brother Paul, a La Salle brother from Portsmouth, England, who works with indigenous students and founded the Loreto Environmental Network in Iquitos, in the Peruvian Amazon.

But he has his eye on other threats to the region’s rivers, especially a plan for 20 dams along the Maranon River, a project that would flood three indigenous communities.

The world’s growing thirst for fossil fuels, electricity and minerals is squeezing indigenous people throughout the Amazon basin, who often inhabit lands rich in oil and gas, timber or minerals. Sometimes indigenous areas slated for flooding by dams to produce hydroelectricity.

Increasingly, indigenous groups are demanding the right – often protected by their countries’ constitutions and enshrined in international treaties – to have a voice in decisions affecting their lands. But resources such as oil, gas and water are considered public property, and political leaders argue that they must exploit to ensure economic growth.

In September, the government of Bolivian President Evo Morales, who is of Aymara Indian descent, cracked down on Indians who live in Isiboro Secure National Park and Indigenous Territory, in the Amazonian lowlands, who were marching over the Andes Mountains to the capital to protest plans for a highway through the park.

While not openly criticizing the government, Bolivia’s Catholic bishops had urged people along the marchers’ route to help them by providing food and shelter.

One government minister resigned in protest over the violent police action against the protesters, and the interior minister was eventually forced to step down. Morales finally announced that the highway would not go through the park, although he did not scrap the project altogether.

The protesters argued that they had not been consulted about the highway construction, which they feared would bring illegal loggers to the forest and open up their lands to farmers growing coca, the raw material used to make cocaine.

That highway, as well as roads and hydroelectric dams planned for the Peruvian Amazon, was to be bankrolled and built by Brazilian companies.

Brazil’s energy consumption grew by nearly 8 percent in 2010, driven by industrial consumption, which was up more than 10 percent over the previous year. With its eye on Asian export markets, Brazil is also financing the construction of highways to the Pacific coast through Ecuador, Peru and Bolivia.

One of the most controversial projects in the Amazon region is on the Xingu River in northern Brazil, where a large hydroelectric dam would reroute the river, reduce the flow and flood a number of villages inhabited by indigenous people and fishing families.

While courts decide a series of appeals over the project, construction has proceeded, bringing thousands of people to the area near the town of Altamira in search of jobs.

“Our communities are suffering,” said Sheyla Juruna, a Juruna Indian who lives in a tiny community near the river. “The social and environmental impacts are already being felt,” as forests are cleared and wild game becomes scarce, she said.

Although local residents want roads and jobs, the dam will ultimately create more environmental and social problems, said Bishop Erwin Krautler of Xingu, in the Brazilian state of Para.

“The Amazon is unique in the world, and development must be adapted to the region,” said Bishop Krautler, who passionately defended the region during a meeting of Latin American bishops in Aparecida, Brazil, in 2007. “That isn’t being done. Amazonia is being treated is if it were just any state in the country. It is considered an area to be exploited for the benefit of others, leaving nothing. That strikes a blow to the heart of Amazonia.”

Similar arguments are raised about oil exploration in the Amazon. The Ecuadorean government has made a novel offer to refrain from drilling for oil in Yasuni National Park – an area of high biodiversity that is also home to two indigenous tribes that shun contact with the outside world – if industrialized countries, which use the most fossil fuels, compensate it for the lost revenue.

The U.N. Development Program has set up a trust fund for the $3.6 billion the Ecuadorean government is seeking – half the estimated $7.2 billion value of the 850 million barrels of oil under the park.

But critics say Ecuadorean President Rafael Correa is sending a mixed message by threatening to go ahead with plans to drill for oil if other countries do not contribute at least $100 million by the end of this year.

“We want to safeguard our forest. We want them to respect our nationality, our territory and our forest,” said Manuela Ima, a leader of the Waorani people, who are related to the isolated tribes in the park. “It would be best if the oil stayed in the ground.”

Brother Paul sees environmental issues as a challenge to people of faith, and he finds hope in the indigenous students with whom he works.

“The appetites of China and Asia and other countries for raw materials are not going to go away,” Brother Paul said. The students “will be able to educate their own people and be the bridge between indigenous communities – which are often uninformed and don’t understand the value of their natural resources – and the Western world.”