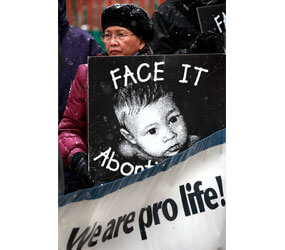 WASHINGTON – After declining steadily for the past quarter-century from a high of 29.3 in 1981, the U.S. abortion rate increased slightly in 2008, according to the latest Guttmacher Institute survey of abortion providers.

The number of abortions performed has remained relatively stable at about 1.2 million abortions a year for each of the past five years, but more abortions were performed in nonhospital settings and more were chemical rather than surgical abortions, involving use of the abortion pill mifepristone, also known as RU-486, or methotrexate.

The full report on “Abortion Incidence and Services in the United States, 2008” was published online and will appear in the March issue of Perspectives on Sexual and Reproductive Health.

Deirdre McQuade, assistant director for policy and communications at the U.S. bishops’ Secretariat of Pro-Life Activities, noted that the Guttmacher study showed a continued decline in the abortion rate among teens ages 15 to 17 but said it was because of “the delayed onset of sexual activity, not more contraception.”

Sharon Camp, president and CEO of Guttmacher, said the survey results show that “we need to do more to increase access to contraceptive services to prevent unintended pregnancy, while ensuring access to abortion services for the women who still need them.”

But McQuade said in a Jan. 18 analysis of the report for Catholic News Service that “in every country where contraceptive access was increased, abortion rates increased even more.” She cited a study in the January issue of the journal Contraception that showed overall contraceptive use in Spain increased 63 percent between 1997 and 2007, “but the rate of elective abortion doubled.”

“So putting more women on more birth control provides no assurance that they will not get pregnant and approach for an abortion in the future,” she said.

McQuade also criticized the Guttmacher study for failing to report fully on the adverse events and complications of what the report called “early medication abortion,” noting that RU-486 “involves three office visits and two different drugs whose side effects can be severe and even life-threatening, including heavy hemorrhaging and deadly septic infections.”

“RU-486 not only goes after a whole new customer base with the false promise of an easy, safe alternative to surgical abortion, but its increased use lets the abortion industry shift to a method that requires less overhead to administer, thereby adding to the ever-increasing bottom line,” he said in a Jan. 11 statement.

“Pro-abortion advocates have long said they want abortion to be ‘rare,’“ O’Bannon added. “Yet, sadly for mothers and their unborn children, it is clear from these latest findings that abortion remains a big business in the United States and that the abortion industry is continually working to increase both their reach and their bottom line.”

“The pro-life movement is working toward that day when all pregnant women feel free to choose life, and there are no abortions at all – whether legally sanctioned or illegally committed,” McQuade said.