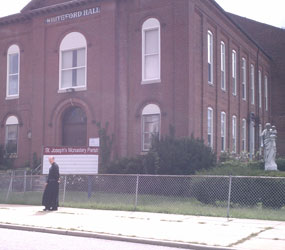 Folks who graduated from grade school about the time television was just beginning to glow in the living rooms of working families have been lighting up the Internet talking about the upcoming St. Joseph Monastery School reunion.

On Facebook, Mary Klinedinst Lepley asked: “Is anyone going from 1943 or around that time?”

Rose Byrne Ireland responded: “Are you and Evelyn going to the reunion, Mary?”

The reunion will take place Oct. 15. It is likely to be the last one to take place on the grounds of the former Passionist Monastery, a southwest Baltimore landmark rivaled only by Mount St. Joseph High School, across Frederick Road.

“We’re up to more than 250 people and they’re still calling every day,” said Gail Fisher, a 1968 graduate who works as a youth minister for the parish. “It’s exciting but sad, because it’s the last one.”

Volunteers are working on decorations like it was a sock-hop. Folks are asking for old classroom supplies – an eraser, a piece of chalk – as souvenirs. Bathrooms have been inspected to make sure everything is in working order; someone was running out to buy some Drano just to make sure.

Passionist Father William B. Murphy, who went to grade school there in the mid-1950s, is now pastor of St. Joseph’s Passionist Monastery Parish. He will attend the reunion with fellow alumni who remember the School Sisters of Notre Dame teaching reading, writing and the old Baltimore Catechism – to classrooms with more than 50 kids.

In its hey-day after World War II, the monastery – using new buildings constructed in the 1950s along with an earlier schoolhouse built as a gift from Celinda Whiteford -had more than 1,000 students. In the 1970s it became a multi-parish “cluster” school known as Madonna.

For the last decade-and-a-half, it had operated as St. Bernadine School, under the direction of Monsignor Edward Miller, pastor of the Edmondson Avenue parish. Last year, with less than 200 students, it was closed.

After the reunion dinner, there will be a tour of the old school building, with the ghosts of arithmetic past mingling with overwhelming nostalgia.

“There will be a lot of energy,” said Father Murphy. “These are not graduates from the last 15 years or so. This will be a group that goes way back – back to what the church was before the Second Vatican Council. Growing up like that gives people a certain bond because that’s not the way the church is anymore.”

The celebration will begin with a 4 p.m. Mass in the Monastery sanctuary on Old Frederick Road, a late 19th century treasure considered by old-timers to be the “Cathedral of Irvington.”

“We have people who moved away coming back to get married because the church is so beautiful,” said Georgia DiLella, a parish volunteer who attended the school after her family moved to Yale Heights from Pittsburgh in 1963.

The reunion will take place in the parish hall, at 251 S. Morley St. Tickets are $44 (make checks payable to St. Joseph Monastery Parish) and will not be sold at the door. A barbecue dinner will be catered by Beefalo Bob’s. For more information, 410-566-0877.