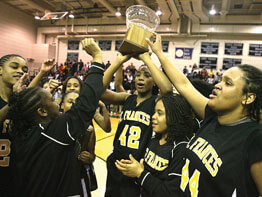 The defending champion Panthers defeated top-ranked The Seton Keough High School, Baltimore, in overtime 43-39. The Gators came into the championship game undefeated in regular season, and ready to dethrone the five-time defending champ. But the Panthers could not be denied.

This low scoring-contest was uncharacteristic of both teams, who usually put up an average of 50-60 points per game, but the hype of the contest seemed to rattle both teams in the beginning.

The game was close through the first half of play as the Gators took their first lead with 1.1 seconds left on the clock when senior point guard B.J. Williams hit two smooth free throws to jump ahead 15-13.

To open the third quarter, Seton Keough senior Arika Ullman drilled a three to open up a five-point lead, 18-13, but Panther center Kandice Green fired back with three consecutive buckets to give the Panthers a 35-28 lead.

The lead seesawed for the rest of the game, as people in the standing-room-only crowd were on their feet, weighing-in on each and every shot, rebound, turnover and call from the officials.

Green played remarkable defense against Seton Keough center Asya Bussie, a junior, who finished with nine points on the day.

As the clock ran down in regulation, it was Panthers sophomore point guard Shatyra Hawkes who took control of the offense, firing short jumpers, driving to the hoop and delivering clutch free-throw shooting. “Somebody had to step up,” said Hawkes. “Coach told us at halftime to go in hard and that we can do.”

The Panthers and Gators went into OT knotted at 37. When the four-minute period tipped off, the momentum swung toward St. Frances, as Green hit a huge baseline jumper to extend the Panthers’ lead to 42-39.

This is St. Frances Academy’s sixth consecutive championship and seventh in eight years. The last championship title for the Seton Keough Gators came in 2000.