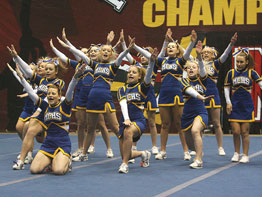 A perfect score is 300 points. The Archbishop Spalding High School, Severn, cheerleading team scored 225 in the Maryland State Cheerleading competition on Jan. 5 at 1st Mariner Arena, Baltimore, and for the fifth year in a row, captured first place in the Varsity Parochial School division.

Under the direction of Head Coach Lindsey Miller, who is in her fifth season with the Lady Cavaliers, the squad of 14 performed a two-and-a-half minute driving, up-tempo performance to land a first-place finish.

“These are just a great group of girls. I am so proud of how they support each other,” said Miller.

Captains Heather Sanders and Kate Wheeler, seniors, and Nicki Lechert and Brittany Walterhoefer, juniors, are the go-to leadership hub for the team this season as the Cavs’ competitive cheerleading schedule is just getting underway.

The rigorous first-place routine involved everyone on the squad, performing stunts, two tumbling routines, a high-level gymnastics piece, a cheerleading routine and a dance portion. A very diverse effort from this five-time championship squad has underscored the advancement of cheerleading over the last decade with greater athleticism, endurance and strength as the foundation of a growing sport.

The Cavs placed in front of Mercy High School, Baltimore, and Our Lady of Mount Carmel High School, Essex, for the title.

“I would encourage people to watch a competitive cheerleading event. It is so much more than what they see at a football or basketball game,” said Miller. “It’s a true athletic performance.”

Next up for the Lady Cavs is another state competition on Jan. 19 at the University of Maryland, College Park.