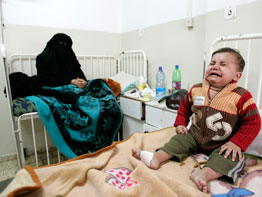 JERUSALEM – Shatha Halu, a first grader at Holy Family School in Gaza City, put on his backpack and climbed down the 10 flights of stairs in his building on the way to school.

At the bottom of the stairs he turned to his mother, who had made the long trek down with him and, looking up the steps, asked her how he would be able to climb all the way back up after school with his heavy bag.

“It is a very bad situation,” said Monsignor Manuel Musallam, pastor of Holy Family Church, who recounted the story in a telephone interview with Catholic News Service Jan. 21. “This lack of electricity is stopping civilization, stopping life in Gaza.”

Israel closed the border to the Gaza Strip and temporarily banned imports, including the fuel necessary to run Gaza’s power plant, following a sharp increase in the number of rockets Palestinian militants fired into Israeli border towns. Gaza is controlled by the militant Islamic group Hamas.

Following an international outcry, on Jan. 22 Israel allowed enough fuel for electricity for two days to be pumped into the Gaza Strip. It also delivered cooking gas, medicine and food. Israel promised enough total fuel delivery over three days to allow the Gazan power plant to run for a week, but said a ban on gasoline would continue.

On Jan. 23, tens of thousands of Palestinians flooded into Egypt to buy goods after militants blew up most of a seven-mile border wall at the Rafah border crossing.

Monsignor Musallam said Jan. 21 that while Holy Family School has a generator for its electrical needs, it would soon run out of the gasoline needed to run it. The school and the church can function without electricity, he said, but the hospitals were in dire need of fuel to run their generators.

He said he donated his last fuel to Shifa Hospital, which was requesting donations so it could treat patients. At least five people died in Gaza hospitals due to the lack of electricity.

“We can manage with not using our computers, but in the hospitals the sick people need the electricity to survive,” said Monsignor Musallam.

He said many people had been unable to bathe for nearly a week, since electricity is needed to pump the water. Some teachers asked to bathe at the convent, since the church has its own generator.

Parents asked that the school be closed because they were embarrassed to send their unbathed children to school. However, the priest said he would keep the school open because “we must challenge the situation.” He added that when the children are together at school they can talk to their friends, play and be distracted from the difficult situation for a few hours.

Israel said it provides about 60 percent of Gaza’s electricity, and another 5 percent is provided by Egypt. The power outage mainly affected Gaza City.

Monsignor Musallam said children arrived at school without having eaten breakfast because there was very little food to buy in the shops, and bakeries stopped baking bread because they had no electricity. Teachers, who had nothing to offer their students to eat, readjusted their teaching schedules because the children were tired, complained of headaches and were unable to sit through two hours of lessons, he said.

The previous weekend two of the school’s students were injured by shrapnel following an Israeli missile attack, the priest said, and after receiving initial first aid treatment at the hospital, they were sent home because there was no possibility of giving them further treatment.

“We must stop shooting, but also the (Israelis) must stop. That is it,” he said.

Israel said that in January 400 Qassam rockets had been fired into Israeli border towns – more than half from Jan. 15 to Jan. 18. Since the blockade, the number of missiles was reduced to a trickle, said Israeli officials, who added that when the Hamas government wants to stop the rockets it can.

The heads of Christian churches in Jerusalem and the Holy Land called on the international community, U.S. President George W. Bush and Israel to end the blockade “in the name of God.” In a Jan. 22 statement, they said the blockade was “illegal collective punishment, an immoral act in violation of the basic human and natural laws as well as international law.”

The church leaders also urged the Palestinian leadership to unite “for the sake of their people in Gaza” and called for the gunmen to stop firing missiles into Israeli territory.

“We would say to all concerned parties while … you persist in firing rockets into Israel you encourage public opinion outside this land to feel there is a justification for this siege,” they said.

“We pray for the day when the people of Gaza will be free from occupation, from political differences, from violence and from despair. We pray for the Israelis and Palestinians to respect human life and God’s love for every human life,” they said in the statement released by the Jerusalem Inter-Church Center.

Gisha, the Israeli Legal Center for Freedom of Movement, said in a Jan.20 statement, “We condemn the illegal rocket attacks on civilians in southern Israel, but punishing Gaza’s 1.5 million does not stop the rocket fire; it only creates an impossible balance of human suffering on both sides of the border.”

Caritas Jerusalem called for “an immediate end to the blockade facing Gaza, an urgent appeal to help address the humanitarian situation there and for an end to all military actions by the Israeli army and by militants in Gaza.”

Abraham H. Foxman, U.S. director of the Anti-Defamation League, said in a Jan. 23 statement, “We are stunned at the torrent of condemnation that has been aimed at Israel in recent days by the international community regarding Israel’s defensive responses.”

Noting that Hamas has attacked Israel, he asked, “Where is the outrage from the international community in response to the rockets falling hourly on … targets in southern Israel?”

He said Israel has the obligation to protect its citizens and unsuccessfully has tried other measures.

Sahar Shaat, a project officer at the U.S. bishops’ Catholic Relief Services Gaza office, said she had been studying for her master’s exams by candlelight.

“There are continuing electricity shortages about eight hours every day according to schedules and according to areas,” she said. “We are in winter and it is very cold, and we are without heaters. All the people in Gaza use electric heaters.”

She said there was still gas for cooking, and meat and chicken were available, but people were worried about what would happen if that food runs out. Food cannot be kept in refrigerators because it will spoil without electricity, she noted.

“There is a shortage of everything. If we find something it costs double” the normal price, she said, noting that employees of nongovernmental and humanitarian organizations felt helpless in the face of the growing shortages.