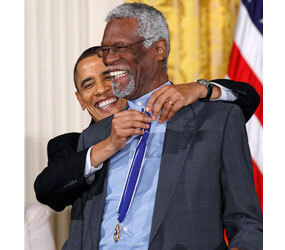 WASHINGTON – A Catholic labor leader, a baseball Hall of Famer and a member of the Kennedy clan were among those who received the Medal of Freedom in White House ceremonies Feb. 15. The Medal of Freedom is considered the nation’s highest civilian honor.

John Sweeney, the former president of the AFL-CIO, was honored, as was baseball Hall of Famer Stan Musial and Jean Kennedy Smith, founder of Very Special Arts, a nonprofit organization that promotes the artistic talents of people with disabilities.

Sweeney, 76, was AFL-CIO president for 14 years. Before that, he was president of the Service Employees International Union for 15 years, capping a 35-year career there. The son of Irish immigrants, he quit his job at IBM soon after graduating from college and took a two-thirds cut in pay to become a researcher for the International Ladies Garment Workers Union. He has served as a consultant to the U.S. bishops’ Committee on Domestic Justice and Human Development.

Musial, 90, known as “The Man” during his 22-year playing career – all with the St. Louis Cardinals – banged out 3,630 hits during his career, still the fourth best of all time, including 475 home runs. He won the National League’s Most Valuable Player award three times, as well as three World Series championships with the Cardinals. The owner of a .331 lifetime batting average, he became President Lyndon Johnson’s physical fitness adviser following his retirement after the 1963 season.

Musial met Pope John Paul II at the Vatican in 1988, and twice before he ascended to the papacy.

Smith, who turns 83 on Feb. 20, is the last surviving child of Joseph and Rose Kennedy. In 1974, she founded Very Special Arts, which is affiliated with the John F. Kennedy Center for the Performing Arts in Washington. It has affiliates in 60 countries and across the United States dedicated to creating a society where people with disabilities learn through, participate in and enjoy the arts.

Smith also served as ambassador to Ireland under President Bill Clinton. She has been on the boards of the Kennedy Center, the International Rescue Committee and the Carnegie Endowment for International Peace.

Also honored was civil rights activist Sylvia Mendez, 74, a Californian of Mexican and Puerto Rican descent. Her parents’ successful fight to get her enrolled in an all-white school in Orange County, Calif., led to a 1946 California Supreme Court decision that effectively desegregated the state’s public schools and foreshadowed the 1954 U.S. Supreme Court ruling that ended segregation in all U.S. public schools.

Basketball Hall of Famer Bill Russell, while in college, led his team, the Jesuit-run University of San Francisco, to two consecutive NCAA men’s basketball titles before winning 11 NBA championships as a player and player-coach with the Boston Celtics.

In remarks during the medal ceremony, President Barack Obama said the recipients represented “the best of who we are and who we aspire to be.”

One award was made posthumously, to Dr. Tom Little, an optometrist murdered on a humanitarian mission in Afghanistan.