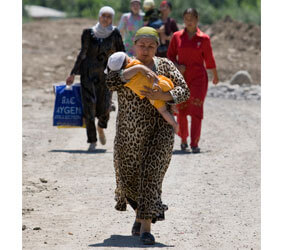 WARSAW, Poland – A Polish priest ministering in Kyrgyzstan refuted reports that local Christians were targeted for religious reasons during recent violence against Uzbek communities but warned that many people were left “fearful and in need” after the fighting.

“This is a political struggle with ethnic ingredients,” said Jesuit Father Krzysztof Korolczuk, who works in Jalal-Abad. “It isn’t aimed in any sense against Christians.

“If Uzbek and Kyrgyz Christians have been killed defending their homes, it’s for national reasons, not because of their religious beliefs. Nor have local Muslim religious leaders played any part in the conflict or made anti-Christian statements,” he told Catholic News Service.

The Jesuit spoke as the United Nations reported that 400,000 people were displaced during the bloody clashes, which erupted June 11 in Jalal-Abad and Osh, leaving hundreds dead and injured.

In a June 18 telephone interview, Father Korolczuk said he had not heard of casualties among the Catholic communities in both towns, where Uzbek shops and restaurants had been torched and gunshots still could be heard.

However, he added, some Catholics attempted to leave the country but had been stuck in a miles-long backup at the now-closed border with Uzbekistan. Other remained, afraid to leave their homes, he said.

Father Korolczuk said his parish was offering shelter to several Kyrgyz, Uzbek and Russian families with small children, who had been unable to obtain basic food, water and medications.

“While the new government seems powerless, the army hasn’t been trained to put down unrest and defend civilians,” said Father Korolczuk said, who administers newly formed Catholic parishes in Jalal-Abad and Talas.

“It’s also dominated by Kyrgyz soldiers and feared and distrusted by all sides. Although we must hope the conflict can be settled internally, without foreign intervention, the lack of neutral institutions poses severe problems here,” he said.

Kyrgyzstan’s interim president, Roza Otunbayeva, told Russia’s Kommersant daily newspaper June 18 that she believed as many as 2,000 people died in the violence, despite an official toll of 191. She said her government would “do everything” to rebuild Osh and Jalal-Abad.

Meanwhile, the International Commission of the Red Cross warned of an “immense crisis” caused by the lack of basic necessities for refugees from the fighting, which broke out two months after former President Kurmanbek Bakiyev was ousted by a popular uprising in the capital, Bishkek.

In a June 14 interview with Vatican Radio, Bishop Nikolaus Messmer, Kyrgyzstan’s apostolic administrator, said he believed the conflict was a “provocation by relatives and supporters” of ex-President Bakiyev, now in exile in Belarus.

Meanwhile, the Vatican nuncio to Kyrgyzstan and Kazakhstan, Archbishop Miguel Maury Buendia, told Vatican Radio June 15 that he feared an “absolute humanitarian catastrophe,” adding that many local inhabitants were afraid of being attacked if they appeared on the streets.

“The government does not seem able to maintain calm, and some of those who are supposed to be maintaining the calm, it appears, have even been shooting at Uzbeks,” Archbishop Buendia said.

Muslims nominally make up more than 80 percent of the 5 million citizens of mostly mountainous Kyrgyzstan, 15 percent of whom are ethnic Uzbeks. Overall, the small, land-locked country, which also borders China, Kazakhstan and Tajikistan, is home to about 100 nationalities.

The Catholic apostolic administration, created in 2006, numbers around 500 church members, mostly descended from Polish and German settlers and Soviet-era deportees, and counts 19 churches and chapels, served by 13 priests, monks and nuns. About 30 Catholics regularly attend Masses in Jalal-Abad and Osh, both of which are home to dozens of Muslim mosques.