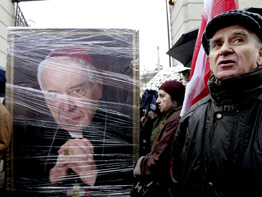 VATICAN CITY (CNS) – The fallout from the resignation of Polish Archbishop Stanislaw Wielgus continued, with revelations about his role as an informant for former secret police, warnings about new disclosures to come and the resignation of a leading churchman in Krakow, Poland.

The following day, Father Janusz Bielanski resigned as rector of Krakow’s Wawel Cathedral, the burial place of Poland’s kings and queens and a landmark of church history. Father Bielanski also had been accused of cooperation with communist-era secret police.

Meanwhile, a former aide to Pope John Paul II, Polish Father Adam Boniecki, said whoever had “disinformed” Pope Benedict about Archbishop Wielgus should suffer consequences. In December, the Vatican press office said Pope Benedict had shown “full confidence” in the new Warsaw archbishop, after Vatican officials took “account of all his life circumstances, including those connected with his past.”

“This is serious, and someone should pay for it — in Poland, in the Secretariat of State or, according to some people, among the ultraconservative German friends of (Archbishop) Wielgus,” Father Boniecki told the Rome newspaper La Repubblica.

Father Tadeusz Isakowicz-Zaleski, a Polish priest who has been investigating the secret police archives, said records show that the Polish bishops’ conference and the Vatican’s apostolic nunciature in Warsaw waited until Jan. 2 to request archival documents on Archbishop Wielgus from Poland’s National Remembrance Institute.

“Rumors were circulating for months. Why was there such hesitation in checking them out?” Father Isakowicz-Zaleski said in an interview with the Italian newspaper Corriere della Sera.

Father Isakowicz-Zaleski said the evidence indicated Archbishop Wielgus was not an “innocent” collaborator but an “important agent” who was employed for spying outside the country.

He said it was clear that the archbishop had agreed to collaborate as a young priest and that he remained registered as an informant for more than 20 years. The fact that he acted as an informant outside Poland indicated he was well trusted by the secret police, Father Isakowicz-Zaleski said.

The priest acknowledged that the secret police documentation is not always trustworthy and cannot be read “like the Bible,” but he said there was enough to indicate Archbishop Wielgus was unusually important to the communist regime.

After Archbishop Wielgus’ resignation, the retired archbishop of Warsaw, Cardinal Jozef Glemp, strongly defended him, but others in the Polish episcopate were less sympathetic.

Bishop Tadeusz Pieronek, former secretary of the Polish bishops’ conference, said Archbishop Wielgus has a responsibility for “having lied to the pope and then having said the pope was informed about everything, and having continued until the day he took office to deny that he agreed to collaborate or that he carried out the collaboration.”

Bishop Pieronek, interviewed by Corriere della Sera, said there was no doubt that people opposed to the church would continue to use the archival information from the communist era to attack the church. But he said the church has its own duty to admit past mistakes and publish the relevant material.

He said the Polish bishops’ historical commission, which now has five members reviewing communist-era documents, needs to have 100 people to do the job properly, and that every diocese in Poland should institute a local commission to do the same.

Detailed documents among 68 pages of material published by the Polish newspaper Gazeta Polska include a “top secret” instruction manual, signed by then-Father Wielgus under a code name “Grey,” which listed basic assignments when he was a student in Germany beginning in 1978.

Among other things, Polish intelligence wanted him to provide detailed information about Radio Free Europe, which was based in Munich, Germany, at the time, and to provide regular reports on professors and students at the German institute he was attending.

He also was to provide evaluations of church-state relations in Poland. The agreement was formulated seven months before the election of Pope John Paul.

It was not clear how much information Father Wielgus eventually provided.