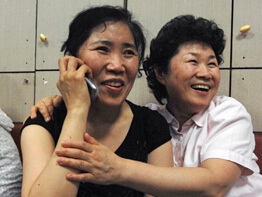 SEOUL, South Korea – As 19 South Korean hostages returned safely to their country, Catholic and Protestant church leaders said it was time to reflect on overseas missions and service.
“I welcome the release of all hostages and thank all who made great effort(s) to save their lives in and outside Korea. But I cannot restrain my grief toward the two men killed there,” said the Rev. Kwon Oh-sung, secretary of the National Council of Churches in Korea. He spoke to UCA News, an Asian church news agency.
The 19 Korean hostages, who were kidnapped July 19 in Afghanistan, arrived home Sept. 2 and were reunited with their families. The Koreans, all members of Saemmul Community Church in Seongnam, near Seoul, arrived in Afghanistan July 13 to provide free medical and educational services and were supposed to leave July 23.
Their kidnappers were members of the Taliban, which controlled most of Afghanistan until a U.S.-led coalition ousted them in 2001. The captors killed two of the men in late July and released two women in early August.
In exchange for the prisoners’ release, the South Korean government promised to withdraw its troops from Afghanistan and said it would stop missionaries from traveling there.
Rev. Oh-sung told UCA News Aug. 31 that he respects the agreement between the Taliban and the South Korean government.
“It is the right time for churches and missioners to reflect on overseas mission and discuss its principles again,” he said.
Father Peter Pai Young-ho, an official of the Catholic Bishops’ Conference of Korea, told UCA News Aug. 31 that he was glad to hear news of the release, although he lamented the casualties.
“We should review overseas mission and not repeat this kind of thing,” he added.
The Rev. Choi Hee-boum, executive secretary of the Christian Council of Korea, said that what needs to be done now is to “distinguish between service and mission abroad and prepare a concrete mission strategy for countries religiously and culturally different from us.”
The Rev. Kang Sung-sam, executive director of the Korea World Missions Association, told UCA News that some Protestant representatives of mission groups and directors of mission work for some major denominations met Aug. 30 and “expressed deep concern about the agreement between the Taliban and the government to stop all mission work in Afghanistan.”
“It is regrettable to withdraw goodwill missioners living and serving there,” he said.