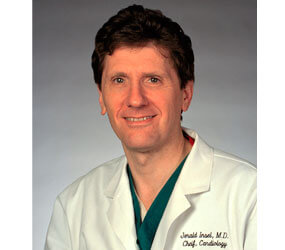 Sudden cardiac arrest (SCA) is one of the leading causes of death in the United States, claiming up to 300,000 lives each year – more than the total lost annually to breast cancer, lung cancer and HIV/AIDS combined.

In more than 90 percent of cases, death occurs.

“For most people, their first vascular event is their last vascular event,” said Dr. Jerald Insel, chief of cardiology at Good Samaritan Hospital in Baltimore. “That’s why it is so important to talk to your doctor about your risk factors.”

While some people believe that SCA and a myocardial infarction or heart attack are the same, they are actually two different events. During SCA, the patient’s heart stops abruptly and without warning, and in most cases, there are no symptoms. Irregular heart rhythms, or arrhythmias, prevent the heart from pumping blood to the brain and vital organs.

A heart attack is caused by one or more blockages in the heart’s blood vessels, preventing proper flow, and the heart muscle dies. Heart attacks are usually accompanied by symptoms such as chest pain, radiating pain in the left arm, between shoulder blades and/or jaw, difficulty breathing, dizziness, nausea and vomiting and sweating.

In some cases, a heart attack may lead to SCA.

“Anyone who has a weak heart is at risk of sudden cardiac arrest,” Insel said.

Candidates include patients with severe coronary artery disease, those who have had a previous heart attack, history of heart disease or cardiac death in the family, unexplained fainting or palpitations, chest pain, shortness of breath, or those who have been diagnosed with a cardiac ejection fraction (the percentage of blood that is pumped out of the heart during each heartbeat) of less than 40 percent.

“The bottom line is,” Insel said, “we need to find the cause of the problem, treat it and make the heart pump better. If there’s a blockage, we need to fix that. There’s medication, such as beta blockers or ACE inhibitors. Or they may need an angioplasty or bypass surgery.”

While searching for the cause of the patient’s heart trouble, Insel said there is a non-invasive solution for those at risk of SCA: a wearable cardioverter defibrillator (WCD).

A WCD, such as LifeVest, manufactured by Pittsburgh-based Zoll, is a lightweight device worn under the patient’s clothing that provides protection by continuously monitoring the patient’s heart. If a life-threatening heart rhythm is detected, the device automatically delivers a treatment shock to restore normal heart rhythm. Unlike a traditional defibrillator, a WCD requires no bystander or EMS intervention.

“The LifeVest buys time,” Insel said. “It gives us time to treat the patients, so we don’t leave them unprotected for two to three months while we’re treating them.”

The entire event, from detecting a life-threatening arrhythmia to automatically delivering a treatment shock, usually occurs in less than 60 seconds. Timing is crucial in SCA, because a patient’s survival rate decreases by 10 percent for each minute after SCA if defibrillation does not occur.

Insel shared a story about one of his patients, a retired postal carrier in his 70s who had a weak heart. His LifeVest signaled an event late one night, so Insel had him come to his office first thing the next morning.

“I can picture him – I remember exactly what he was wearing that day,”he said. “He was dressed to get breakfast at Denny’s. If he hadn’t been wearing that LifeVest, he would not have been sitting in my office that morning with his sport coat on. He would have been dead. That’s the power of the defibrillator.”

If the patient does not respond to medications or procedures during the WCD period, the next step is an implantable cardioverter defibrillator (ICD), which stays implanted in the patient’s chest to monitor the heart and deliver precise electrical shocks to restore a normal heartbeat.

Sudden cardiac arrest is treatable, and patients who may be at risk of SCA should contact their cardiologist to answer any questions and consider treatment options. “With sudden cardiac arrest,” said Insel, “one episode is one too many.”