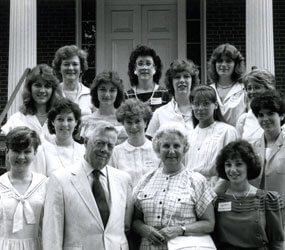 Henry and Marion Knott never allowed their 13 children to think they were better than anyone else. There were no family vacations until the children were all adults. The offspring had to be home before midnight and all were expected to contribute to the community at large.

“Daddy,” said daughter Rose Marie Knott Porter, “was the tough taskmaster. Mother was the calming effect on the family.”

Knott Porter didn’t grasp the magnitude of her family’s wealth until she attended Baltimore’s Institute of Notre Dame. Henry, who died in 1995, was a wildly successful contractor and real estate developer, as well as one of Baltimore’s greatest philanthropists.

“We didn’t know anything was there,” Knott Porter said. “We had very little allowance.”

Today, people know of the Knott family’s lasting commitment to Catholic education through scholarship giving, which began in 1981. Thirty years of generosity was celebrated at College of Notre Dame of Maryland’s LeClerc Hall in Baltimore April 10 with a Mass and reception.

Many current and past beneficiaries of those scholarships were in attendance at Notre Dame, along with hundreds of family members, supporters and education.

The Mass’ homilist, Father Robert Wagner of the Diocese of Arlington, was a Knott Scholar who attended Sacred Heart School in Glyndon and Mount St. Joseph’s High School.

William Macsherry, alumni coordinator for Knott Scholarship Fund, said past scholars “are really committed to all of the same values that the Knotts had.”

Archbishop Edwin F. O’Brien, the presiding celebrant and chair of the Marion Burk Knott Fund Board, honored the continuing work of the family.

“I know the work that goes into these scholarships,” Archbishop O’Brien said at the close of Mass. “It’s very impressive how seriously the family takes that. They do it so quietly. No headlines. They do it and it’s done right.”

Knott Porter currently serves as president of the Marion I. and Henry J. Knott Board. She tries to continue the legacy of her parents, especially after Marion died in 2003.

“It’s very rewarding,” she said. “It makes you proud of what they accomplished.”
She said her father loved Catholic education.

“My father would have liked to have seen every kid in the Catholic schools with a Knott scholarship,” Knott Porter added. “He wanted the best and the brightest. He wanted to give them an opportunity and wanted them to give back to the community.”