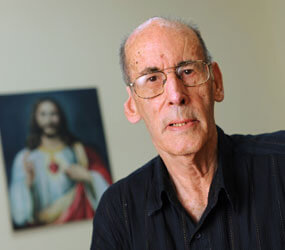 HAVANA – A young man knocked on the door of the Catholic parish and asked for soap.

“I don’t think someone as young and strong as you should be knocking on anyone’s door asking for soap,” the priest replied. “You should work and buy the soap with your wages.”

The man explained why he was so desperate: “I have AIDS and I cannot get a job so easily.”

“I didn’t know anything about AIDS – nothing,” the priest recalled. “It was a word without much meaning.”

But after the stranger told him there were other young Cubans with the disease, Monsignor Fernando de la Vega invited them into the church.

Fifteen years later, Monsignor de la Vega is considered one of Cuba’s foremost advocates for HIV and AIDS patients. He has fed and counseled thousands of patients at his Havana church, Our Lady of Montserrat.

Monsignor de la Vega is an “altruistic, humble servant of God and mankind,” said Dr. Byron Barksdale, a Nebraska pathologist who has directed the nonprofit, U.S.-based Cuba AIDS Project since 1998. The project has supported the priest’s work.

Monsignor de la Vega said the young man who knocked on his door in 1995 was named Regino and died of AIDS several years ago. The support group the priest began at the time still meets weekly at the parish.

The priest said neighbors and some parishioners criticized him at first for helping the AIDS patients.

“They didn’t understand. They told me that AIDS was God’s punishment and I had no right to interfere. I summoned the courage and told them that in Christ’s time, the lepers were … discriminated against,” he said. “But Christ did heal some of them and helped everyone who asked for help.”

The priest said he wanted to follow that example and try to help people infected with HIV.

Early on, he said, he concentrated on trying to boost patients’ self-esteem and ensuring that they did not suffer discrimination or feel inferior to anyone else.

He said he also tried to not to let politics or even religion interfere with his work.

“Religion and politics are two things that divide people,” he said. “What I wanted was to unite people, not divide.”

So, Monsignor de la Vega said, even today when the support group meets, he asks people to focus on the disease, not religion or politics.

“He never preaches. He never tries to shove religion down anyone’s throat,” said Costa “Gus” Mavraganis, program travel director for the Cuba AIDS Project. “The man has been a truly inspirational person to me. I love that man.”

Monsignor de la Vega said he also avoids judging patients, many of whom are gay.

In 2008, Cuban officials reported that 10,454 people in the country were HIV-positive; 68 percent were homosexual or bisexual men.

The priest said he does not ask about anyone’s sexual preference.

“If you have homosexual leanings, be it gay or lesbian, it’s a very personal issue and we don’t question it. We do ask that when we meet, that you show up as the sex you were born with even if you don’t like it. So if you’re a man, don’t get dressed up or painted up and call yourself a woman. If your name is John, it’s John, not Juana. But after you leave here, you can do what you want.”

The monsignor also encourages abstinence. He tells gays and bisexuals to avoid sex rather than worrying about getting a disease or using a condom, but he does supply condoms to people who insist on having sex.

His supporters say the priest has helped clear up misconceptions about AIDS in Cuba.

Some people used to think they could get AIDS by sitting in the same chair or drinking from the same glass as an AIDS patient, he said, adding, “They thought AIDS was acquired by osmosis.”

But there are no longer such mistaken ideas about the disease in Cuba, he said.

Barksdale said Monsignor de la Vega has “destigmatized HIV/AIDS among his parishioners, the Cuban Catholic Church as well as the immediate community.”

But obstacles remain, Barksdale said, including “a chronic lack of funds. And sometimes the government of Cuba and the Catholic Church outside Cuba misunderstand what he does with the HIV/AIDS group.”

Monsignor de la Vega was born into an affluent family and could have left the island decades ago. Instead, he stayed and became a priest in June 1975.

“My father was in the Baptist Church and my mother was a Catholic,” he said. “My mother had thought of becoming a nun. My father crossed her path and they fell in love. My mother never became a nun. They married and had two children.

The priest said he became a Catholic and his younger brother became a Baptist, “which made our family very special. Mother and the eldest son were Catholic and father and younger son were Baptist.”

He said his brother eventually “abandoned the Baptist Church and became a communist, which was unfortunate in the sense that he declared himself to be an atheist.”

“That reaffirmed my conviction to fight a little bit more to defend God, starting with my own family, and here I am 35 years later,” he said.