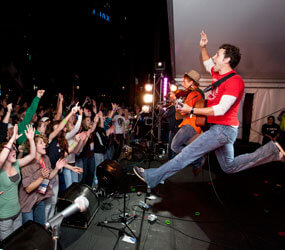 VATICAN CITY – At World Youth Day Madrid, they will be back, bigger and offering more variety than ever.

The Knights of Columbus and the Sisters of Life, assisted by several other organizations, are offering English-speaking pilgrims at WYD a huge center where they can attend concerts, learn more about their Catholic faith, pray quietly, debate contemporary issues and access the Internet with free Wi-Fi.

Madrid’s Palacio de Deportes (sports palace) will be converted into the Love and Life Center during WYD Aug. 16-21.

“First and foremost, we hope the site will help people learn about their faith. And if the pilgrims learn something about the Knights, I hope it will be the fact that we are an organization that can help them live out and strengthen their faith by engaging in charity and evangelization of culture,” said Andrew T. Walther, the Knights’ vice president of communications and media.

Pilgrims planning their days in Madrid and anyone interested in following the events at the center from afar can check out the center’s website at www.wydenglishsite.org.

The Knights and the Sisters of Life, a religious community founded in 1991 by Cardinal John J. O’Connor of New York, sponsored a center in Sydney during World Youth Day 2008.

“We have invited some of the same speakers and performers to Spain – and many more,” Walther said in an email response to questions.

Size is the big difference between the center in Sydney and the one in Madrid, he said. The Palacio de Deportes seats more than 10,000 people and events are planned from 10 a.m. to midnight with the only breaks being the times when the pilgrims have the big WYD opening Mass or appointments with Pope Benedict XVI.

Expanding the offerings would not have been possible, Walther said, without the help of co-sponsors: Holy Cross Family Ministries, the Apostleship of Prayer, Salt and Light Television, the John Paul II Institute for Studies on Marriage and Family, FOCUS (the Fellowship of Catholic University Students) and World Youth Alliance.

A standard part of World Youth Day is the morning catechesis led by a bishop. Dozens of English-speaking bishops from around the world will address small groups of pilgrims in churches and church halls around Madrid. But at the Love and Life Center, each morning one bishop will take the main stage and address the entire assembly.

While English will be the common language at the Love and Life Center, the young people making it part of their Madrid itinerary will come from around the world, Walther said.

“Canada, Australia and the United States all plan national gatherings of their pilgrims at the palacio during World Youth Day, but we have also had strong interest from countries where English is a second language, such as some of the Scandinavian countries,” he said.

While the Knights are known particularly as a parish-based service and fraternal organization, they also “do a great deal of work to further the new evangelization and part of that is a significant young adult outreach – especially through our college council program,” he said.

The Knights have more than 200 college councils, and college Knights will serve as volunteers at the Love and Life Center, he said.