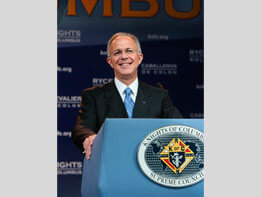 QUEBEC CITY – The Knights of Columbus adopted resolutions Aug. 7 at their 126th annual convention in Quebec City renewing their commitment to speak out against elected government representatives who challenge life from conception to natural death.

They also resolved to call for “legal and constitutional protection … for the definition of marriage as the union of one man and one woman to the exclusion of all others.”

Regarding life issues, they renewed their “deep commitment to oppose any governmental action or policy that promotes abortion, embryonic stem-cell research, human cloning, euthanasia, assisted suicide and other offenses against life.”

Earlier, in his address to the convention, Supreme Knight Carl Anderson told delegates their fundamental responsibility is to build a culture of life, and he challenged American Catholics to overturn the “regime of Roe v. Wade” in November by withholding their votes from any candidate who supports abortion.

“We will never waver in our efforts to protect innocent human life and we need no greater honor than to know that we have stood beside our most vulnerable brothers and sisters in their hour of need,” he said.

The resolution on marriage described it as a natural institution, “based on ancient human values that have evolved over time into a unique and deeply rooted social, legal and religious institution.”

“The case for marriage is the case for family and no one is more suited to pursue that goal than the world’s largest family fraternal organization – the Knights of Columbus,” Mr. Anderson said.

The Knights also adopted resolutions regarding religious liberty, the Universal Declaration of Human Rights, decency on the Internet and in the media, Catholic education and the continued use of “under God” in the U.S. Pledge of Allegiance.