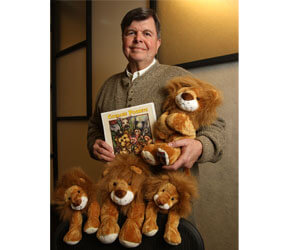 John Ramming is amazed by the growth that the Courage Unlimited Program he founded has experienced in just a few years.

What started in Carroll County as a brainstorm to help ailing children has grown from garnering small donations to considerable support from corporate sponsors – influence that has allowed it to spread to more than 70 hospitals and institutions across the nation.

“Who would’ve ever thought that we could create such a big program from nothing,” said Ramming, a St. Joseph, Sykesville, parishioner and past grand knight of its Knights of Columbus Archbishop Fulton J. Sheen Council 7612.

“We sometimes sit back and laugh at each other just thinking about it. All I know is that we could never have done it without our Blessed Lady.”

The calling card of Courage Unlimited is “Duffy the Lion,” a stuffed animal that, along with a book, “Courage Pockets,” and an audio book with songs in English and Spanish, comfort children as they experience illness, trauma, abuse and other crises.

The program began six years ago, when Council 7612 was inspired to alleviate the healing of children.

Bull roast proceeds were directed to Father Salvatore Livigni, then chaplain at Johns Hopkins Hospital, who gave ceramic angels and figurines as ice-breakers to children receiving care at the institution.

Father Livigni arranged for Ramming and other members of Council 7612 to meet with pediatricians, social workers and other specialists at Hopkins Children’s Center. Brainstorming about therapeutic tools for children in crisis, “Duffy the Lion” was born.

Ramming has many anecdotes of how “Duffy” has changed for the better the lives of children, but the story of Eric Larch stands out.

“I don’t tell this story very often,” he said, sighing as if to brace himself.

Father Pat Tonry, then pastor of St. Joseph, contacted Ramming and Council 7612 to tell them about Eric, a 13-year-old fighting four different types of cancer. Ramming and fellow members of his council went personally to deliver “Duffy.” Later, Eric contacted them to express thanks for “Duffy,” and told them of his desire to do two things: to share with hospitalized children how “Duffy” had helped him, and to become a Knight, like his father and grandfather.

“That was something unheard of,” Ramming said. “As far as we were concerned, nobody had ever done this before.”

Despite the lack of precedent but after much consultation, Ramming’s council took Eric through honorary four degrees of Knighthood.

“It was March 8, 2006,” Ramming said, “a cold, quiet, nice evening. But there is one thing I can’t explain about that day: there was a sweet aroma of roses all throughout the day. Not a single rose was around, but the smell was always there.”

The story carries significant emotional content for Ramming, who repeatedly says that Council 7612 couldn’t have helped Eric without the guidance of Our Blessed Lady. He assigns the aroma of roses to her presence during Eric’s Knights ceremony.

Death is inevitable for some children, but with “Duffy the Lion,” Ramming and the Knights of Columbus can make a difference in those lives, as they did with Eric.

More information about the Courage Unlimited Program can be found at www.couragelion.org