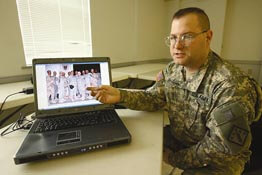 While on his second tour in Iraq, U.S. Army Maj. David Anthony had no Knights of Columbus council to join. But by the time the St. Francis de Sales, Abingdon, parishioner left the Middle East 10 months later, the Camp Victory Knights of Columbus Round Table in Baghdad was established and growing.

Maj. Anthony joined the Father Maurice J. Wolfe council of the Knights at St. Francis de Sales about a year and half ago because he felt the Knights provide a good opportunity to continue to serve the church and the community. In addition, his father was a 4th degree Knight and he wanted to carry on the tradition.

“When you are a kid you do the altar serving thing and the youth groups and the Sunday school, and when you are an adult you do other things in the church,” said Maj. Anthony.
In Iraq, Maj. Anthony attended daily Mass with Father Joseph Orlandi, a military chaplain who came from a parish in New Jersey. Father Orlandi joined with Lt. Col. Nicholas Scopellite, both 4th degree Knights, to start a council in Bagdad. Since the small group of about six men, including Maj. Anthony, didn’t have a Grand Knight, they enlisted the help of a Colorado Springs council and were able to form a round table of Knights.

“At first there were only six of us but they continued to ask men to join, and every two weeks for about the first three months we would have a first degree (an initiation),” said Maj. Anthony. “Eventually there were about 60 Knights, and then before I left there were as many as 75.”

Council 11634 in Colorado Springs sent rosaries, Knights of Columbus pins and other important ceremonial items. The round table, even though everyone is equal, has a president, vice president and secretary to help keep things in order, said Maj. Anthony.

The Knights met every two weeks or so to pray and plan activities. They would help the chaplains by taking the Eucharist to other servicemen. There are only so many chaplains and hundreds of thousands of servicemen, said the Knight.

The Knights would also help the poor Catholics still living in the area, especially those at St. Basil in Baghdad.

“Until the Knights showed up, no one was helping them,” said Maj. Anthony. “We will lose sleep before we let anything bad happen.”

It is tradition for St. Basil parish to give the children who are celebrating their first holy Communion new shoes, so the Knights took up a collection to help provide shoes for the youth.

“The Knights have gotten much more involved since I left,” said Maj. Anthony. “They are really dedicated. They want to go out and make things happen.”

The Knights were also ushers during Mass and set up the nondenominational chapels for Mass.

Maj. Anthony said the men who became Knights in Baghdad are part of the Colorado Springs council but can join another council in their area when they come back to the United States or any other country in which they live.

“Going to the Knights meeting was a break from work and you get to be with other Knights who are doing the same thing you are,” said Maj. Anthony.