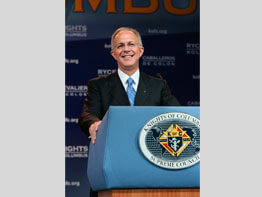 QUEBEC CITY – Supreme Knight Carl Anderson challenged American Catholics to overturn the “regime of Roe v. Wade” in November by withholding their votes from any candidate who supports abortion.

He made the comments during an address to the 126th annual convention of the Knights of Columbus in Quebec City.

In a wide-ranging 68-minute report that reviewed the organization’s accomplishments during the last year, Mr. Anderson saved his strongest comments for nearly the end of his address. He criticized politicians of all parties who court Catholic voters by saying that abortion is one of many issues that deserve attention in any election.

“It’s time to put away the arguments of political spin masters that only serve to justify abortion killing,” Mr. Anderson said.

In apparent reference to Illinois Sen. Barack Obama, the presumptive Democratic nominee for president, Mr. Anderson said change in the country can come only when the practice of aborting unborn children ends.

“It’s time to stop accommodating pro-abortion politicians, and it’s time we start demanding that they accommodate us,” Mr. Anderson added as the 500 delegates from around the world stood up and loudly applauded.

Mr. Anderson said he was not singling out candidates from any political party for criticism.

Later, Mr. Anderson told Catholic News Service that he decided to focus on the same terminology that Obama is using in his presidential campaign “to get people’s attention.”

“This is kind of the touchstone for this whole election year; I’d like Catholics to think what real change, fundamental change in a Christian sense would mean,” he said.

At the same time, he repeated that his message was not aimed at any specific candidate.

During his speech, Mr. Anderson said voters in California, Colorado and South Dakota have the chance to limit abortion by voting for ballot initiatives Nov. 4.

Mr. Anderson also promised that the Knights would remain focused on protecting marriage as a life issue. He cited a second set of constitutional amendments on the November ballot in Arizona, California and Florida that would define marriage as the union of a man and a woman or ban polygamy, group marriage and same-sex marriage.

Focusing on the California ballot issue, Mr. Anderson took aim at the state Supreme Court, which ruled 4-3 May 15 that such same-sex couples have the right to have the state designate their civil unions as marriages, in essence legalizing same-sex marriage.

Saying that the court’s justices took it “upon themselves to ignore the will of the people and impose a radical new interpretation of the law,” the supreme knight called for Californians to let their voices be heard by voting for the constitutional amendment.

Through the Web site www.FathersforGood.org, unveiled Aug. 5, the program offers fathers advice on parenting, the importance of fathers to a family, being a good role model and spirituality.

Mr. Anderson also said that Knights around the world volunteered more than 68 million hours last year in parishes and community organizations and with individuals.

In Luzon, Philippines, more than 5,000 members were reported to have been added to the Knights’ ranks. Poland was held up as the Knights’ latest jurisdiction, growing to 12 councils and 645 members during the last 12 months.