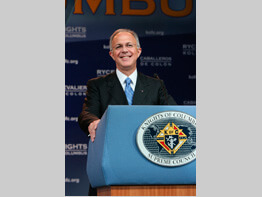 VATICAN CITY – The head of one of the largest, most active groups of lay Catholics asked the world Synod of Bishops on the Bible to consider drafting a book that would help priests and laypeople link the Sunday Bible readings to the teachings in the Catechism of the Catholic Church.

Carl Anderson, supreme knight of the 1.75 million-member Knights of Columbus, made the suggestion Oct. 21 when he addressed the synod as one of the observers appointed by Pope Benedict XVI.

“To provide greater formation and catechesis for the laity,” he said, “a compendium to the Lectionary” could be developed to highlight how the various sections of the Catechism of the Catholic Church flow from or are influenced by the Sunday readings.

The compendium, Mr. Anderson said, also would “provide a greater richness in Sunday preaching and a greater connection between the fundamental truths of Catholic faith and holy Scripture.”

Mr. Anderson also told the synod that, for many years, the Knights of Columbus have been promoting a form of “lectio divina,” or prayerful reading of the Scriptures, within the context of the rosary and the Knights’ Marian Hours of Prayer.

Begun in 1979, the Knights’ Marian Hour program has fostered prayer services in homes, churches and other locations. The prayer hour is focused on Mary, using a different one of her titles each year, and the Knights distribute pilgrim icons that serve as the focal point for the prayer services. The services begin with Scripture readings and a reflection or homily, which leads into recitation of the rosary.

Beginning with the Sept. 8 feast of the Nativity of Mary, the Knights are focusing for a year on Our Lady of Charity of Cobre, the patroness of Cuba.

Father Adolfo Nicolas, superior general of the Jesuits and a voting member of the synod, told Vatican Radio Oct. 22 that he found the lay observers at the gathering to be very interesting because “they gave us a different point of view.”

Repeatedly, he said, the lay observers emphasized “the desire to have access to the Bible in a way that is less technical and closer to the life of laypeople and the person on the street, who are looking for meaning, for joy and for hope and how the Bible could be a help in daily life.”

“We must make the word of God much simpler and use language that is close to their real lives,” Father Nicolas said.

The superior general, who was elected in January after decades of work in Asia, said that during his years in Japan he noticed people, Christians and non-Christians alike, were a lot more interested in the Bible than in traditional Catholic catechesis.

“The most important fruit of the word of God for the majority of people is that it offers an alternative: a different world, the world of God, the world of compassion, hope and community,” he said.

Simply reading about God’s vision for the world, he said, “is already a source of hope for many.”