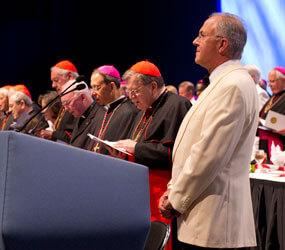 DENVER – The archbishop of Quebec told members of the Knights of Columbus gathered in Denver for their convention he hoped they would be transformed, just as the first disciples had been transformed at the Transfiguration.

“The Gospel reminds us that ‘Jesus took with him Peter, James and John his brother, and led them up a high mountain … and he was transfigured before them,’ said Archbishop Gerald Cyprian Lacroix, quoting from the Gospel of St. Matthew.

“This year the Lord has led us up a high mountain to the Mile High City – Denver, Colorado – for a very special experience; hopefully a transfigurating experience,” he said.

Archbishop Lacroix, who also is the primate of Canada, was one of three speakers at the Knights’ States Dinner Aug. 2. The others were Cardinal Juan Sandoval Iniguez of Guadalajara, Mexico, and U.S. Cardinal Raymond L. Burke, who is prefect of the Apostolic Signature, the Vatican’s supreme tribunal.

The States Dinner drew about 2,500 Knights at the Colorado Convention Center the evening of the 129th Supreme Convention’s opening day.

To kick off the event, dozens of cardinals, archbishops, bishops and dignitaries processed in, carrying colorful state and country flags, led by a Mardi Gras-flavored band. Delegates and their wives, in formal attire, waved flags and cheered as they welcomed the processors into the banquet hall.

The orchestra then played the national anthem of each country represented: Canada, Cuba, Dominican Republic, Mexico, Philippines, Poland, United States and Vatican City. The evening continued with a singalong featuring a tune for each of the 50 states, Puerto Rico, Guam and the provinces of Canada, Mexico and the Philippines.

In his remarks, Cardinal Sandoval encouraged Knights to familiarize themselves with “Ecclesia in America,” Blessed John Paul II’s apostolic exhortation on the 1997 Synod of Bishops for America.

“The letter … is a document that sheds light on the reality of our America,” he said. “It proposes solutions based on the Scriptures and sets lofty and noble goals for our apostolic work.”

Of the ideas discussed in the document, he said the most prominent is unity.

“Blessed John Paul II possessed a deep intuition about the continent’s unity, a unity that serves as both a point of departure and a goal for our pastoral actions,” he said. “Between Catholics and members of other Christian faiths, we make up the majority of the inhabitants of the hemisphere.

“Our common problems, which are many and serious, must be confronted based on our identity and faith in Christ,” he said.

Cardinal Burke, a “brother Knight” for 36 years, delivered the keynote address, in which he spoke on the life and witness of Blessed John Paul and the significance of carrying out the new evangelization the late pontiff promoted.

Cardinal Burke explained that teaching the truth of conscience must be one of the church’s priorities in today’s society.

“In a culture bombarded with the noises and false images of secularization,” he said, “the church, out of love of all our brothers and sisters, that is for the sake of the common good, must make the voice of conscience ‘audible and intelligible once more for people.’“

He also addressed evangelization through participation in public life.

“In many so-called advanced nations, we witness an increasing tendency to deny to citizens the most fundamental right: the right to observe the dictates of one’s conscience, formed through right reason and the teaching of the church,” he said. “When reason is not purified by faith in the political realm, the powerful and influential of the time exercise a tyranny which violates the fundamental rights of the very people whom political leaders are called to serve.”

The cardinal urged the members of the Knights to remain steadfast in their witness “even in the face of indifference and hostility.”

Earlier in the day in giving his annual report, Supreme Knight Carl Anderson reminded members this year marked the 50th anniversary of the inauguration of President John F. Kennedy, himself a Knight of Columbus member. Anderson spoke of the president’s call to action in that 1961 inaugural address.

“President Kennedy recalled that our rights come from God,” he said. “He reminded us that on earth, God’s work must be our own. It was a monumental speech … that continues to resonate today.”

In other action during the Aug. 2-4 convention, delegates passed several resolutions to, among other things, honor Blessed John Paul and support religious liberty, the institution of marriage, the armed forces and Catholic education.

The Knights also reaffirmed their commitment to building a culture of life by fighting abortion and helping pregnant women in need; promoting policies that favor the family; calling for laws that protect the conscience of all medical personnel; and upholding the church’s opposition to the death penalty.

The fraternal organization also named a Wisconsin family as the 2011 International Family of the Year: Ronald and Elizabeth Simurdiak and their three children, Joseph, John and Jenna. The Simurdiaks are members of St. Therese of Lisieux Parish in Phillips, Wis., in the Diocese of Superior.