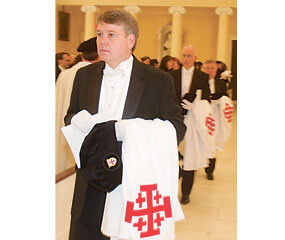 Christians in the Holy Land have new advocates half a world away.

Several Catholics from the Archdiocese of Baltimore were invested as Knights of the Holy Sepulchre during an Oct. 30 Mass at the Basilica of the National Shrine of the Assumption of the Blessed Virgin Mary in Baltimore.

They joined other newly invested knights from several dioceses and archdioceses in pledging to defend the church and undertake works of charity with a “deep spirit of faith and love.”

Ladies of the Holy Sepulchre were also invested, promising to let their actions and minds “be turned to the land of the Redeemer” and taking care “that his holy name be spread and loved everywhere.”

The investiture Mass, celebrated for the Middle Atlantic Lieutenancy of the Knights and Ladies of the Holy Sepulchre, represented the first time the celebration was held in Baltimore.

“The purpose of the order is to help sustain the Christian presence in the Holy Land,” said Michael Ruck, a basilica parishioner who serves as a Knight Commander with Star.

In an Oct. 29 vigil service at the basilica, several knights and ladies from the Baltimore archdiocese were among those promoted to higher ranks or publically recognized with honors.

Monsignor Jeremiah F. Kenney was presented with the Cross of the Order of Merit with Silver Star – the order’s highest honor given to a Knight of the Holy Sepulchre. Monsignor Kenney, judicial vicar emeritus with the Archdiocese of Baltimore, was the only knight in the country to be recognized with the honor.

A degree signed by Cardinal John Foley, grand master of the Equestrian Order of the Holy Sepulchre of Jerusalem, called Monsignor Kenney a “man of singular excellent character among all other men” and a “most noble officer of the divine service of the Lord in the priesthood.”

Monsignor Kenney noted that the Knights of the Holy Sepulchre represent the only pontifical order of knighthood whose purpose is to protect the Christian presence in the Holy Land. It was founded in 1099 by Godfrey de Bouillon, Monsignor Kenney said.

In his Oct. 30 homily, Archbishop O’Brien said members of the order enjoy a missionary mandate to defend and promote all the teachings of the church. Such a mandate is not optional to any believer, he said, and “surely not to members of an order committed to the defense and spread of a faith fiercely attacked today in the mass media, academia and the public sector for daring to represent views not politically correct in secular circles.”

“Mary, intercede for the success of our Equestrian Order of the Holy Sepulchre of Jerusalem around the world and, surely, here in our beloved land,” Archbishop O’Brien said. “Pray that this lieutenancy, enriched by new and zealous knights and ladies, may be persevering in our shared beliefs and in our innovative, generous and courageous efforts in the spread of our treasured faith.”