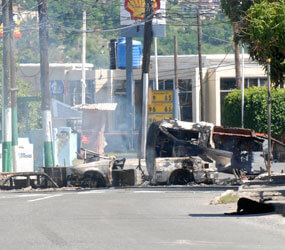 KINGSTON, Jamaica – The violence that shook Jamaica’s capital in late May stems from a combination of economic woes, drugs, corruption and the country’s history of power politics, said church leaders.

Jamaicans “have spawned an unhealthy situation of dependency and lawlessness,” Kingston Archbishop Donald Reece wrote in a letter to church workers in the country. “What we have sown, we are now reaping.”

Government officials said 44 people – including at least one police officer and one soldier – were known dead in the violence that broke out the weekend of May 22. News reports May 26 said about 500 people were arrested.

Monsignor Kenneth Richards, vicar general of the Archdiocese of Kingston, who heard automatic weapons fire and occasional explosions around his residence at the city’s cathedral, told Catholic News Service that the sounds had subsided by the morning of May 26.

Police and soldiers were patrolling the streets, and the government had imposed a monthlong state of emergency, he said.

The violence was sparked by Jamaican Prime Minister Bruce Golding’s decision to extradite Christopher “Dudus” Coke to the United States on drugs and firearms charges. The decision was a turnabout for Golding, who had refused the extradition for about nine months.

The police raid in the Tivoli Gardens section of Kingston, Coke’s stronghold, failed to capture the reputed drug lord, but sparked retaliation from his supporters and other gangs whose members attacked police stations and threw up barricades in the streets of the capital city.

Coke, who has described himself as a businessman and government contractor, is a “don,” or local strongman, who has been tied to Golding. The prime minister represents Tivoli Gardens in Parliament but denied reports of links to Coke’s alleged drug-running activities.

Dons such as Coke got their start in the 1960s and ‘70s as enforcers for political parties, but gradually gained their own power bases as drug running and other activities gave them financial independence from political groups, Monsignor Richards said. Over the past two decades, Caribbean islands have become way stations on drug shipment routes from South America to the United States.

Violence has flared before in Tivoli Gardens, a “garrison,” as the city’s low-income neighborhoods are called.

“This is something that was waiting to happen,” Monsignor Richards said.

In his May 24 letter to church workers, Archbishop Reece expressed concern about the possibility of continued violence.

“Anarchy is a real threat to all of us,” he wrote, calling the latest violence “the result of decades of slackness and lack of integrity and accountability on the part of all, but especially politicians of both major political parties who have courted and cultivated the ‘dons’ and gangs in areas to secure votes.”

Residents who came to Coke’s defense, including several hundred women who staged a demonstration, see him as a “benefactor,” Monsignor Richards said. “They equated him to Jesus.”

While some of Coke’s hold over his supporters is because of “fear of fire power,” Monsignor Richards said, dons such as Coke provide poor residents of their neighborhoods with money for food and school fees, as well as security. They also “have their own form of justice,” he said.

In the wake of the violence, police appeared to be targeting not just Coke, but gangs in general, but Monsignor Richards said those efforts were likely to be unsuccessful unless the government stepped in to provide the social services that made people loyal to the dons.

Over the past two decades, the number of Jamaicans living in poverty has dropped from one in four to one in 10, according to official figures. But about half of those in poverty are children, and the income gap between rich and poor is wide.

The global economic crisis has also taken a toll, and most parishes collect food for distribution, Monsignor Richards said.

“Things are getting bad since the crisis,” he said. Poverty “is high and getting worse, because a lot of people are losing their jobs.”

In his letter, Archbishop Reece expressed concern about a total breakdown in the country.

“Gang rivalry and rape, drugs and gun-trafficking, extortion in broad daylight, maiming and murder, blockading of garrisons and public thoroughfare, attacks on the Jamaica Constabulary Force and the Defense Force by criminal elements seem to be the order of the day,” he wrote. “We seem to be heading toward a ‘failed state,’ like a runaway vehicle with no brakes and no direction.”

Golding vowed to crack down on illegal activity and gang violence, but Monsignor Richards said any change would come slowly.

“I think it will take some time for things to settle down,” he said.