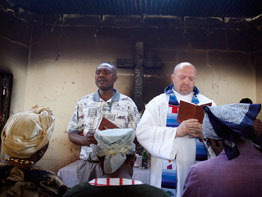 NAIROBI, Kenya – A Kenyan bishop said his appeals for humanitarian assistance for the Diocese of Eldoret have been met quickly following the violence sparked by the country’s disputed Dec. 27 general elections.

Bishop Cornelius Arap Korir of Eldoret told Catholic News Service things gradually were taking shape as agencies such as the United Nations, the Kenyan government, the Red Cross and other churches were joining Catholic relief agencies in sending financial and material assistance.

“As I speak to you, the camped people are being fed, those sick (are) being treated and makeshifts (are) being constructed. This for me is very pleasing and hope-giving,” he added.

Bishop Korir said Jan. 7 that “shops have now opened, (and) banks are operative as closed roads are now opened.”

Catholic relief agencies were among the first to respond to the humanitarian crisis.

Ken MacLean, country representative for Catholic Relief Services, said his Nairobi-based office had moved three of its emergency response officers to the worst-hit area of Eldoret, about 125 miles northwest of Nairobi, the Kenyan capital. CRS is the U.S. bishops’ international development and relief agency.

MacLean told CNS Jan. 7 that CRS has committed $10,000 to the crisis through the Diocese of Eldoret and $5,000 through the Diocese of Bungoma in western Kenya. The local affiliates of Caritas Internationalis, the international Catholic umbrella aid agency, and the English and Welsh bishops’ Catholic Agency for Overseas Development have made similar financial commitments, said MacLean.

He said aid agencies were challenged to quickly make available food, medicine, mosquito nets and tents for the heavy concentration of needy people.

Tens of thousands of people were scattered throughout Eldoret and an estimated 42,000 were outside the city, MacLean said. The people are camped in schools, church compounds and police stations in the heat, he said, adding that Sacred Heart Cathedral is housing an estimated 8,000 people.

Janet Mangera, national executive secretary of Caritas Kenya, told CNS that her office has been mandated to coordinate humanitarian and emergency activities on behalf of the Kenya Episcopal Conference.

“We have already sent out appeals (to) our partners, and we expect positive responses,” she said.

Human rights organizations said more than 300 people have died since the Dec. 27 presidential election in which President Mwai Kibaki was declared the winner. Among those dead were up to 50 people burned alive in an Assemblies of God church where they had sought refuge in Eldoret.

Thousands of ethnic Kikuyus, who have dominated Kenya’s political and economic life since independence from Britain in 1963, have been forced to flee rampaging gangs. Kibaki is a Kikuyu.