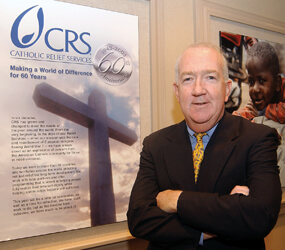 After 17 years leading Baltimore-based Catholic Relief Services, Ken Hackett will retire at the end of 2011. The international relief agency, which assists people in more than 100 countries, has begun a national search for a successor, who is expected to be installed by January, 2012.

Hackett called it the “right time to pass the torch to others” after accomplishing much of what he set out to do in 1993.

“The organization is in a very good place right now,” Hackett said in a Sept. 29 telephone interview, “good in the sense that our reputation and brand is pretty high, our programs are strong, our staff is terrific and our relationships with the church and others around the world are very strong.”

Hackett said he strove to reassert the Catholic identity at CRS, while expanding and improving the quality of its programs.

“It was my feeling after many years of working with people around the world that the poor deserved the best,” Hackett said.

Hackett, a 63-year-old parishioner of the Cathedral of Mary Our Queen in Homeland, joined CRS in 1972 following Peace Corps service in Ghana. He served CRS in posts throughout Africa and Asia, as well as in a variety of positions at CRS headquarters, before taking the helm.

During Hackett’s tenure, CRS became one of the largest and most-respected international humanitarian agencies, growing from an operating budget of approximately $300 million when he began leading the agency to more than $800 million today.

Hackett led a relocation of CRS’s Baltimore headquarters from Fayette Street to a refurbished building near Lexington Market.

New York Archbishop Timothy M. Dolan, chairman of the CRS board, acknowledged Hackett’s contributions, which include leading the agency through emergencies like Hurricane Mitch in the late 1990s, multiple famines in Africa, the Indian Ocean tsunami in 2004 and the Haiti earthquake earlier this year. Hackett also shepherded a major initiative to provide medication to people with AIDS in the developing world.

“It is only because of his extraordinary leadership these past 17 years that we are in such a secure position that we can approach this transition calmly and carefully; and only because of his selfless ‘calling the question’ that we are now commencing this realistic planning for the future of this agency we all so love,” Archbishop Dolan said in a Sept. 29 statement.

Hackett has agreed to continue serving as president for six months beyond the expiration of his current five-year term in June 2011. He will serve beyond that as a consultant until July 2012 to assist in the transition to new leadership.