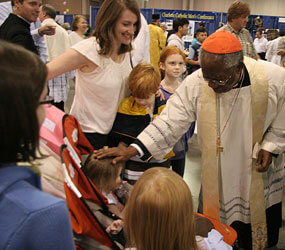 CHARLOTTE, N.C. – Cardinal Francis Arinze told attendees at the Diocese of Charlotte’s eucharistic congress that “religion is not an option.”

“It is not an accessory footnote. It is the duty of the human creature in front of God the creator,” he said.

Cardinal Arinze spoke about the importance of Sunday Mass and the observance of Sunday as the Lord’s day in an increasingly secularized world.

“Sunday is the Lord’s day, the day of Christ, the day of the church and also God’s gift to us humans,” said the Nigerian cardinal, retired prefect of the Vatican Congregation for Divine Worship and the Sacraments and a leading Vatican scholar on liturgy, Africa and Islam.

“The eucharistic celebration is central to Sunday. It is important to see Sunday as source, summit and center of Catholic life,” he said.

The seventh annual congress, hosted by Charlotte Bishop Peter J. Jugis, attracted a record crowd of more than 11,000 Catholics from around the Carolinas to the Charlotte Convention Center Sept. 23-24. Raleigh Bishop Michael F. Burbidge also spoke during the two-day event, one of the few eucharistic congresses in the U.S. held annually and one of only two held in the Southeast each year.

Speaking to a crowd of more than 2,500 at the convention center Sept. 23, Cardinal Arinze emphasized why Christians should keep Sunday holy despite the challenges and distractions they face.

“All time, all history belongs to God. Every instant should be spent in adoring and praising him and rejoicing in his presence. Nevertheless, it remains true that God has singled out a day in the week when humanity should pay special attention to him. So as the Book of Genesis tells us, ‘So God blessed the seventh day and hallowed it,’“ he said.

“The Third Commandment is very clear: ‘Remember the Sabbath day, to keep it holy.’ The day of the Lord is therefore not just a day of rest for man. … It is primarily a day in which … man manifests his gratitude to God the creator by adoration, praise, thanksgiving and by admiration of the wonders provided by God.

“And the church does this especially by the eucharistic celebration,” which is “‘the fount and apex of the whole Christian life,’“ he said, quoting “Lumen Gentium.”

Gathering for Mass gives Catholics a powerful sense of being a community of faith, worship and solidarity, he explained, and this “sense of catholicity” that comes from knowing Catholics the world over are gathering for the same celebration “is very reassuring.”

There are obstacles to honoring the day of the Lord, though, he said. In the more industrialized nations, he blamed “the weekend mentality” for infringing on the observance.

“The tendency is to see” both Saturday and Sunday, he said, as “a period in which normal work activities are suspended, so one can “make space for several engagements for which there was not enough time during the week,” he explained.

Many view Sunday as a free day for sports and recreation – football games, picnics, visits to friends, or grocery shopping, Cardinal Arinze said.

“Such social and cultural activities are good in themselves. … Unfortunately, when Sunday loses its fundamental meaning and becomes merely part of a ‘weekend,’ it can happen that people stay locked within a horizon so limited that they can no longer see ‘the heavens.’“

“Many modern societies are affected by the virus of secularism,” he said. “People live as if God did not exist and as if man were the center around which everything else should rotate. Such people are trying to turn ‘the day of the Lord’ into ‘the day of man.’“

This “drags the human heart away from God and religion and from a sense of God’s transcendence” and “progressively obscures or elbows out long-established Christian values,” Cardinal Arinze added.

In a bilingual homily at the closing Mass of the congress Sept. 24, Bishop Jugis told participants that in a world sadly in need of love, there is one place Catholics know it can be found: at the altar in the Eucharist.

“Is it really the center of our life, around which everything revolves? Does the Eucharist give life to everything we do, day in, day out?” he asked.

Bishop Jugis said people should be eager to receive Christ in the Eucharist, to receive him into their lives and to express their love for him in all that they do.

Contributing to this story was Patricia L. Guilfoyle.