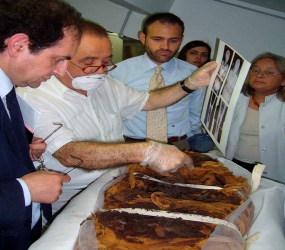 VATICAN CITY – The Vatican Museums had a rare opportunity to unravel some of the secrets inside a 2,000-year-old Egyptian mummy.

Ny-Maat-Re, a female mummy given to Pope Leo XIII in 1894, had been in a serious state of degradation since the 1990s. Poorly embalmed, the linen bandages under her back had rotted away and her spine and ribcage had collapsed.

In 2007 a Vatican expert decided to restore and study her further and the Vatican Mummy Project was born.

Egyptologist, Alessia Amenta, is the curator of the Vatican Museums’ Department for the Antiquities of Egypt and the Near East. She told Catholic News Service that she assembled a team of top-notch experts from a variety of fields to come together to save Ny-Maat-Re, who is one of seven adult and two child mummies in the Vatican Museums’ collections.

“A mummy is a treasure trove of information that will help you reconstruct the life of the individual and discover things about society, customs and religious beliefs,” she said.

“All of that information is contained in the body” and the funerary objects buried with it, she said.

Ny-Maat-Re is scheduled for a CT-scan before the summer and results from DNA samples taken from her and the museum’s other mummies are still pending, said Amenta.

Experts will then piece together the data from these and other tests to learn more about the mummy’s age, diet, illnesses or diseases she may have suffered from, how she lived, her cause of death and what embalming methods and resins were used. Studies are also being made on the wrappings and the dried flowers and insects that were found with her body.

The gaping hole in the wrappings underneath Ny-Maat-Re meant researchers had a unique opportunity to study the body’s interior and a chance to rebuild her backbone and reinforce the chest cavity.

However, there were several problems.

For one, turning a mummy over had never been attempted before, Amenta said. A mummy is so old and fragile, rotating it would have to be carefully planned. A Vatican team made up of restoration experts and castmaker, Andrea Felice, came up with an innovative solution.

The team found a way to tightly seal the mummy with layers of several types of fabric to protect it from static electricity and the heat and humidity from a plaster shell Felice fashioned on top of her.

The team then fixed a metal pole on the top of the half-shell cast so it could be rotated smoothly and added wooden supports on which the turned-over shell would rest.

When the cast was ready, the mummy was successfully turned over to expose the torn wrappings and damaged upper body.

Mummies usually are not unwrapped for study. But since Ny-Maat-Re’s bandages had already rotted away under her back, the team was able to examine her chest cavity and use an endoscope to study inside the cranium. Amenta said they carefully combed through what was found inside the body and discovered floral remnants, insects, substances used in the embalming process, and bones.

Amenta said they removed the ribs from the body because they were beyond repair, but that Felice was able to reconstruct the spine.

He also invented another innovative system for supporting and anchoring the spine in place by encasing it in a special resinous material. The mummy’s chest cavity was then filled with solid foam pieces to keep her chest from collapsing under the weight of the upper bandages.

Once a new backing was sewn in place, Ny-Maat-Re was ready to be turned back over and have her wrappings restored.

Cinzia Oliva, a textile restorer from Turin who specializes in mummy wrappings, spent a year on this phase of the project. She used a tiny suction device called a micro aspirator to clean out the dust and debris, and then repaired, rewove and secured the bandages with a large tulle netting that was tightly wrapped cocoon-like over the mummy.

After her two-year-long restoration, Ny-Maat-Re will still have to wait a few years before making her public debut, because the Museums plan on renovating two of the nine rooms dedicated to Egyptian artifacts, Amenta said. Currently there are two mummies on display in the Vatican’s Gregorian Egyptian Museum. The others are in a climate-controlled storage area.

Amenta said the renovation plans include an educational display with touch-screens to provide details of Ny-Maat-Re’s restoration and information discovered about her life and special displays for the visually impaired.

Her funerary objects, including her sandals, a garland made of roses and rose buds and the three-dimensional painted coverings made of plaster and linen bandages – called cartonnage – that once lay over her wrapped head and legs also will be on display.

Amenta, who was involved in excavations in Luxor, Egypt, said one of the most important things about exhibiting mummies is reminding people that they are not objects, but human beings “who had a life, who loved and were loved, and who deserve care and respect.”

No other civilization has left the world with as rich a patrimony as ancient Egypt, she said.

It has left behind exceptional treasures of art, architecture, science, mathematics, religious and spiritual beliefs, and real people, she said. And now, thanks to advancements in genetic testing and X-ray technology, experts are able to tell the world much more about the lives of those ancient people, she added.

“Egypt’s history is rewritten with every new discovery and new techniques that aid those discoveries,” she added.