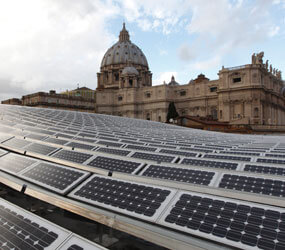 VATICAN CITY – Pope Benedict XVI would welcome having an electric popemobile as a further sign of his commitment to protecting natural resources and safeguarding the earth, said a top Vatican official.

Cardinal Giovanni Lajolo, president of the commission governing Vatican City State, said if a sponsor offered the pope an electric-powered vehicle that “was in working order, efficient and suitable, why not? It would be a sign of his environmental concern.”

The cardinal and others spoke during a Vatican news conference Dec. 1 to present a new book, “The Energy of the Sun in the Vatican,” about the Vatican’s solar power initiatives.

Through the generosity of the Bonn-based company SolarWorld, the Vatican installed 2,400 solar panels on the roof of the Paul VI audience hall in 2008 and, in 2009, the Vatican set up several high-tech solar collectors to help heat and cool its buildings.

Some 305 tons of carbon dioxide emissions, or CO2, have been avoided because of the Vatican’s solar installations, said a Vatican press release Dec. 1.

Pier Carlo Cuscianna, director of technical services for Vatican City, told reporters that plans to supply Vatican City with a fleet of electric vehicles were in a “well-advanced” stage.

Milan Nitzscke, head of communication for SolarWorld, told reporters that it would be possible for the popemobile to be powered with electricity – even from its own solar panels.

Because the popemobile is bulletproof, the car would be heavier than most electric vehicles, “but it is possible and it would be a very good symbol” for promoting environmental awareness and concern, he said.

An electric popemobile is just an idea so far, he said, and “we have to discuss with (Vatican) security” to assure them that the car would be safe, secure and fast.

Security personnel would need the car to have “fast acceleration,” he said, adding that an electric car can go from 0 to 62 mph in 3.5 seconds.

A biomass project that would use garden and organic waste to generate electricity or produce heat, however, is still in the study stage, said Mauro Villarini, the Vatican engineer in charge of the project.

The Vatican has said its aim is to use renewable energy sources for 20 percent of its energy needs by 2020, the target date set by the European Union for its members.