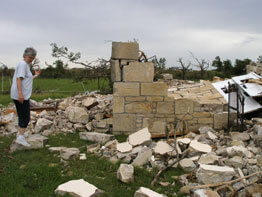 CHAPMAN, Kan. – Killer tornadoes that ripped through northern Kansas June 11 reduced the oldest Catholic church in the Diocese of Salina to rubble, caused considerable damage to another parish and is blamed for the deaths of two Kansans.

However, as the dust settled in the aftermath of the twisters, the faith of many was reaffirmed.

“It takes everything to make you get through something like this,” said John Grau of Soldier, in the neighboring Archdiocese of Kansas City. He had clutched his wife, Barb, as a tornado flattened their home around them.

“Not only your faith, but the people who come to help – those are people of faith, too, and I think that’s what really keeps you together,” he said.

One person was killed in the tornado that hit Soldier. Grau’s house was one of three houses destroyed; 29 homes were damaged.

According to the Kansas City Star daily newspaper, the town of Chapman suffered even worse damage when a half-mile wide twister tore through that area. One resident was killed, and more than 60 houses and several businesses were destroyed.

St. Patrick’s Church – the oldest Catholic structure in the Diocese of Salina, built at the edge of Chapman in the 1860s – was leveled and St. Michael’s Catholic Church in the town’s center sustained damage to the roof and a large stained-glass window above its entrance, said Father Henry Baxa, who provides canonical supervision and sacramental ministries at the church and is pastor of St. Andrew’s Parish in nearby Abilene.

Walking next to the mound of toppled stones by the site of St. Patrick’s, Marita Campbell – parish life coordinator of St. Michael’s – said it was too soon to know what would be done.

The loss of St. Patrick’s will be felt by many parishioners, Campbell said. It was one of several churches built by a well-known missionary priest, Jesuit Father Louis Dumortier, she said.

Construction began in 1861, and the first Mass was celebrated in the church in 1864.

Campbell’s primary goal is to reopen St. Michael’s. Although the tornado passed just north of the church, rectory and parish center, there still was considerable damage.

Officials estimated there was $70 million in damage in Chapman, a third of that encompassing public school buildings. More than half of the town’s homes were damaged or destroyed.

Though shaken by the natural disaster, Father Baxa said the tornadoes have spotlighted the good deeds of fellow Catholics, among them a man who lost his arm – and nearly his life – trying to rescue a neighbor.

When a woman told him her husband was still back at their mobile home on the other side of the football field, Larouche left in his pickup to get him, but the tornado tossed his vehicle in the air before he was able to reach his destination, she said.

In the town of Soldier, the Knights of Columbus mobilized in the aftermath of the tornado. Father Richard Halvorson, pastor of St. Dominic Catholic Church in Holton, said one of the first calls he made was to Grand Knight Tom McAsey, who set up a relief account at Wal-Mart for a couple of families who lost their houses, included Grau, a fellow Knight.

“The Knights came out and did everything in the world that they could do these first two days,” Grau told The Leaven, newspaper of the Archdiocese of Kansas City, June 13. “And then all our neighbors and acquaintances have showed up and all kinds of friends.”

Parishioners of both St. Dominic and the Soldier Christian Church arrived to help families in Soldier clear debris and search for belongings, Father Halvorson said.

Though Barb Grau is grateful for the outpouring of help from the volunteers, she believes her faith in Mary saved her and her husband as the twister leveled their home while they hunkered down in a closet underneath a staircase.

“I had a statue of the Blessed Mother sitting right here in front of the house,” she said, pointing to the concrete foundation. “And she sat there through all the wind and everything. The next morning, she was over by that tree, facing the house, with not a scratch on her. I just know it was the Blessed Mother that kept us alive through all that.”

Contributing to this story was Jill Ragar Esfeld in Soldier.