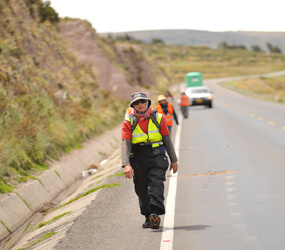 WASHINGTON – Seventy-five-year-old Bob Hentzen, the president and co-founder of the Christian Foundation for Children and Aging, ended his 17-month, 8,000-mile walk across 12 countries to show solidarity with the poor June 6.

“I think walking is a natural outcome from the concept of getting close to God’s people,” Hentzen told Catholic News Service via Skype June 3.

Hentzen, a former Christian Brother, began his journey in Guatemala Dec. 29, 2009. Speaking to CNS from Chile, Hentzen said he would reach Valparaiso, Chile, his final destination, on time.

His goal was to gain sponsorship for a child for each mile he walked in one of 22 countries served by the foundation, which is based in Kansas City, Kan. Along the way, Hentzen visited and walked with some of the 182,000 families helped by the foundation.

While Hentzen’s goal of gaining 8,000 sponsors had not been reached, he earned support for more than 5,000 children. He told CNS that his goal was to reach as many as possible. “Numbers haven’t been that important to me.”

Hentzen started the Christian Foundation for Children and Aging in 1981 with his brothers Jim and Bud Hentzen, their sister, Nadine Pearce, and Jerry Tolle. The foundation is a lay Catholic organization that seeks to serve the poor and marginalized of all religions in 22 developing countries.

Through walking, Hentzen wanted to show his gratitude for the poor and promote awareness of how others can help the poor.

“I simply wanted to make it clear to the families that we serve that we are striving to become equal in God’s eyes, not superior. Rather, someone who walks alongside (them) as best we can, that even someone of my age is willing to do that. … They are really responding to this,” Hentzen said.

He also said that in the final three days of his trip, tens of thousands would be walking with him in solidarity.

“I’m grateful for God’s protection on this thing. We’ve been at it 17 months and the Lord has watched over us.”

The 8,000-mile walk posed both physical and psychological challenges for Hentzen, but it also provided a great spiritual opportunity.

“I’ve learned a lot of things about the families,” he told CNS. “One is that it is doubly challenging to be poor when the entire world is going by at a really fast speed.”

“I’m not exaggerating, we have seen thousands of crosses and little altars along the highway,” he continued. “We walk through everyone else’s trash. To see the environment … the mistreatment of mother earth can be disheartening.”

Despite the challenges, there were small joys that made the trip rewarding and worthwhile.

“Today we saw a lady’s little farmhouse where she devotes herself to the care of adopted animals,” said Hentzen. “In there she had a little goat she was bottle feeding, a little sheep that thinks it’s a dog and probably 10 stray dogs with really neat names like Pepe and Anastasia …,” he said with a laugh.

Just a few moments before speaking with CNS, he said that the mother of one of the foundation-sponsored children expressed to him how much she wanted to sing a song of thanks to the sponsors and made one up on the spot.

Hentzen said that the rest of the world needs to go forth with the same hope and faith as the people with whom he walked.

“We have to be right there with our young people and say, ‘Life is worth living, humanity is OK.’“

Faith helped Hentzen a great deal in his walk. He read the liturgical readings for each week, noting that for the past few weeks, readings focused on the Ascension, which he felt was appropriate for the end of his walk because Jesus says that although he is leaving, he will always be with his people.

“What I have gained personally is the conviction that this life of ours is filled with adventure and in that sense a great deal of hope. At age 75, to be able to do this with vigor and hope, that is a lot to gain,” Hentzen said.

“I’m not out here to prove anything. I’m here to get on down the road, because there are people waiting out there for us.”