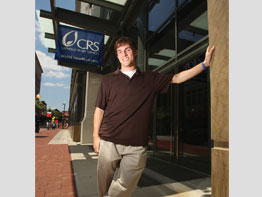 Patrick Terranova has seen the social injustices that haunt many of Baltimore’s streets, and he’s compelled to try and make a change.

Thanks to his experiences at Justice Action Week, an annual program run by the archdiocese’s Youth and Young Adult Ministry office, Mr. Terranova is headed, like many former participants, toward a career in enacting social justice.

Justice Action Week is an immersion for high school-aged leaders in which the seven principles of the church’s social justice teachings are put to the test. The youths will learn about the life and dignity of the human person, call to participation, solidarity, dignity of work, rights and responsibilities, option for the poor and vulnerable and caring for God’s creation.

Mr. Terranova, a rising sophomore at La Salle University in Philadelphia, is an intern at the Baltimore headquarters of Catholic Relief Services this summer, helping the organization connect with youths.

At La Salle, he is double majoring in sociology and public administration with a triple minor in Spanish, urban studies and global understanding.

“I like to describe what I want to do as urban initiative,” Mr. Terranova said, adding he wants to find ways to change the drug-plagued and homeless-filled blocks of Baltimore.

Justice Action Week is so important to him, that he returns every year as a peer minister to help current participants through the week.

He’s betting that some taking part in this week’s edition of Justice Action Week, commonly referred to as JAW, will re-evaluate their futures when it concludes July 11.

“JAW is what opened my eyes to Baltimore,” Mr. Terranova, an Arnold resident and member of St. Andrew by the Bay in Annapolis, said. “You really see how many lives are touched and need to be touched.”

When he completed his senior year in 2003 at Loyola Blakefield in Towson, Mr. Laws found himself humbled by the plight of the homeless during his week in Baltimore.

“More than anything, it kind of pushed me to a point where I said, ‘I really have to do something about this,’ ” Mr. Laws said. “One of the places we went was Health Care for the Homeless. It struck me that some people don’t have the same resources as others and you think of all those people not having health care. The one scene that stays with me is standing out was the waiting room and it was just flooded with people just waiting there.”

When Mr. Laws began classes a few months later at Loyola College in Baltimore, he was a political science major. At the conclusion of the first semester, he found a different calling.

“I guess you could say JAW planted the seed in my mind and I changed to philosophy and theology,” Mr. Laws said.

Each day during the school year, Mr. Laws now challenges members of the senior classes at The John Carroll School to think about others. His religion classes are rooted in the same social teachings he learned at Justice Action Week.

Mr. Laws remembers a commitment paper he signed on the final day of his Justice Action Week experience and it drives him influence the minds of his pupils.

“It’s something that really sticks with you,” he said. “With all of the suffering and poverty, it reminds you to ask, ‘How am I doing with my commitment?’ ”