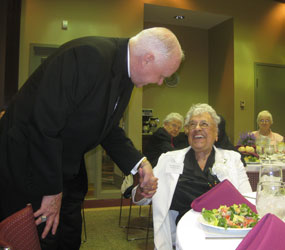 Oblate Sister of Providence Mary Alice Chineworth knew she was called to become a nun when she was a 4-year-old kindergarten student in Illinois. The youngster longed to join the ranks of the Sisters of Charity of the Blessed Virgin Mary, the religious community that taught at her school.

“I heard the voice of the Lord as distinctly as possible,” Sister Mary Alice remembered. “I wanted to be like Sister Fidelis when I grow up. I told my parents, who were daily communicants, and they were thrilled about it.”

There was just one problem: Sister Mary Alice was black and her school’s religious community did not accept “women of color.” Sister Mary Alice searched for one that did, entering the Baltimore-based Oblate Sisters of Providence in 1936. She went on to serve as a teacher at St. Pius V School and St. Frances Academy in Baltimore, in addition to being an educator and principal in other parts of the country. She was also her religious community’s superior general.

Many of the jubilarians gathered at the Cathedral of Mary Our Queen in Homeland May 14 for a jubilee Mass celebrated by Archbishop Edwin F. O’Brien. They renewed their vows and gathered for a dinner with the archbishop, Bishop Denis J. Madden and Bishop Mitchell T. Rozanski.

Sister Maria Luz Ortiz, a Mission Helper of the Sacred Heart and the archbishop’s delegate to religious, said those honored represented a combined 4,150 years of service. Sister Mary Alice, 93, was the longest-serving jubilarian able to be present. School Sister of Notre Dame Bernita Hessling and Daughter of Charity Bertha Robertson are marking 80 years in religious life.

“We never go into retirement because we are always praying,” said Sister Maria Luz, who is celebrating her 50th jubilee. “We never lose our enthusiasm and our sense of humor. We are in the work of the Lord, and we strengthen each other by our presence and our ministries.”

“You have the support of the archdiocese,” Archbishop O’Brien said. “We never take you for granted. We are grateful to God that a day like this is given to us that we can give you some kind of recognition. It’s never, never enough.”

In his homily, Dominican Father Carleton Parker Jones noted that older jubilarians have witnessed many leave religious life after the Second Vatican Council.

“These are sad circumstances,” said the pastor of Ss. Philip and James in Homewood, “and, under these circumstances, is it not remarkable that so many sisters and brothers go on bravely keeping their vows and doing their work day after day, week after week, year after year? It is all under the providence of God.”

Religious exercise patience, he said, and they exhibit great joy in their ministry.

“We adopted a way of life that gave us a much larger family,” he said, “and brought blessings to many people we may never even know.”

Visit www.catholicreview.org/matysekblog for a full list of religious celebrating special anniversaries this year.