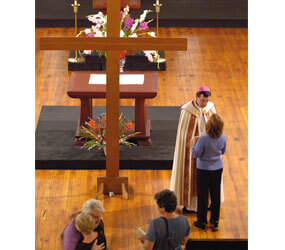 WASHINGTON – Even before the report examining the causes and context of clergy sexual abuse in the United States was released May 18, media reports keenly honed in on one possible cause of abuse cited in the study: the social upheaval of the 1960s.

Monica Applewhite, an expert in abuse prevention strategies, said she was surprised the report was characterized almost solely for what The New York Times dubbed the “blame Woodstock” theory, especially since that factor did not “jump out” at her after reading the 150-page report.

She said highlighting one cause – among multiple factors that were described – “is an extreme simplification of what the report actually says” and ends up oversimplifying “a complicated problem that requires a complex solution.”

“I would encourage people to read the report for themselves, or at least the four-page executive summary,” she added. The report is available online at www.usccb.org/mr/causes-and-context.shtml.

The report: “The Causes and Context of Sexual Abuse of Minors by Catholic Priests in the United States, 1950-2010,” was conducted by a team of researchers at the John Jay College of Criminal Justice of the City University of New York and commissioned by the National Review Board, a lay consultative body created in 2002 under the bishops’ “Charter for the Protection of Children and Young People.”

It concluded that there is “no single identifiable ‘cause’ of sexually abusive behavior toward minors” particularly during the 1960s and 1970s but instead that situational factors, opportunities to abuse, social upheaval of the time and lack of “careful preparation for a celibate life” for priests played a role.

Applewhite said the report makes “a significant contribution” to the study of sexual abuse and could be a model for any youth-serving organization “that decides to study itself.” She pointed out that “no other major organization has taken on a study like this” and credited the U.S. bishops for publicly releasing its findings.

A Texas-based researcher, Applewhite is an expert in the field of abuse prevention and response. She specializes in programs for churches and schools and has worked with several hundred organizations that serve children and youths. She spoke to Catholic News Service May 25 from her office in Austin, Texas.

One aspect of the John Jay report she found particularly helpful was the language it used to describe different ways bishops have responded to reports of abuse in their dioceses – either as “innovators” or “laggards.”

The report describes innovators as those who “understood the harmfulness of the (abuse) acts and moved to implement policies to reduce abuse and remove abusers early on.” It conversely notes that the response of other bishops “lagged behind, thus creating an image that the church generally was not responsive to victims.”

The report said the media “often focused on these ‘laggards,’ further perpetuating the image that the bishops as a group were not responding to the problem of sexual abuse of minors.”

In nearly 20 years of working with religious groups to prevent sexual abuse, Applewhite said she has encountered both types of responses. The most pastoral responses have been from church leaders who met with abuse victims. Those who avoided these meetings have been “more blind” to the effects of abuse, she said.

Just labeling these different responses is a start, she said, since “so much of changing a large organization and problem in society is developing language.” For example, she said, it was important to have language describing the warning signs of abuse or how to establish boundaries in order to bring about changes in behavior to prevent abuse.

But there is still much to be done. From her perspective, the most significant gap for preventing abuse in the Catholic Church and other religious groups is the “lack of professional supervision for ministers.”

She said this observation “came out in the study, but hasn’t received the attention it needs.”

The report notes, for example: “The absence of supervision and/or regular evaluation make it all the more important that newly ordained priests are well trained, or formed, in seminary for the life and the responsibilities they will have in a parish.”

Applewhite said “ongoing monitoring and supervision is a critical factor,” just as therapists have professional supervision and school employees are given performance evaluations.

Since the report’s release, the church has been criticized for acting as if the abuse crisis were simply an ugly page in its past. Applewhite said she does not get that sense from reading the study or from the abuse prevention work she knows is going on in dioceses and religious communities across the country.

“People are saying the church is portraying this as historic, but I pay attention to the steps the church is currently taking to prevent abuse which speak loudly and strongly that abuse is an issue to be addressed day in and day out, year after year,” she said. “The research may say that the worst era has passed, but the church is not saying that the problem is over – not in words and not in actions.”