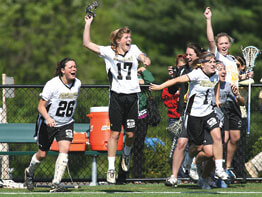 Reaching perfection in anything is a daunting task, especially in the realm of sports.

But for The John Carroll School, Bel Air, “the sky’s the limit,” at least that was the mantra on the back of the Lady Patriots’ shirts for the 2008 IAAM A Conference lacrosse championships on May 10 at St. Paul’s School for Girls, Levering Field.

Indeed the sky was the limit for the John Carroll lacrosse team as they completed the perfect season, 18-0, with an 11-6 win over McDonogh School for the IAAM A Conference title.

“We tried not to focus on an undefeated season or the rankings,” said Head Coach Krystin Porcella. “It was hard towards the end, once the playoffs started and pressure started to build, but we straightened everything out. Each year is different.”

The A Conference game was the final of three title games on Saturday, with John Carroll senior leadership serving as the force behind this well-oiled machine.

With senior Grace Gaeng and junior Brittany Dashiell each scoring three goals for John Carroll, the team never relinquished the lead, pulling 15 of 16 draws their way to keep control of a competitive game.

In getting to the championships this weekend, John Carroll, led by senior Casey Ancarrow, defeated St. Paul’s School for Girls 12-11 on May 6 in the quarters and Notre Dame Preparatory School, Towson, 13-12 in overtime on May 8 in the semifinal match-up.

At the end of a remarkable season, the John Carroll seniors will be missed as nine will graduate and head to college to play women’s lacrosse – a true accomplishment for Porcella and her players.

Senior Ally Carey, who will head to Vanderbilt University in the fall, commented on the team’s top honors.

“McDonogh is such a tough team, and it feels great to get a big win over such a competitive team,” she said. “We came out here and were ready to go. There were times when we were rough on each other, but we pulled it out.”

Slipping by the Gators and the Blazers in the ladder moving forward was a huge concern for John Carroll, wondering if they peaked too soon.

“We didn’t know what was wrong,” said Carey. “The playoffs are just so competitive, and in this conference you have to bring your best game every game and today we happened to do that.”

After being down 6-3 at halftime, McDonogh fought back to cut the John Carroll lead to one, at 6-5. From there, however, John Carroll went on auto-pilot and reeled off five of the next six goals scored.

Give credit to a tight defensive effort that was anchored by John Carroll goalie Lauren McGehee with 10 saves, several at point-blank range.