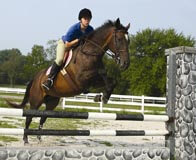 When The John Carroll School, Bel Air, sophomore Kristen Dukes competes in her sport, she doesn’t just shoot for success – she also jumps, swims and runs for it.
Dukes has been training for the National Tetrathlon competition, a precursor to the Olympic Modern Pentathlon, which involves running cross country 3,000 meters, swimming 200 yards freestyle, pistol shooting from 10 meters and riding a jumping course over fences and other obstacles. An international event, the Tetrathlon is held every two years, rotating between the United States and Europe.
In late July, Kristen and her family traveled to Lexington, Kentucky for the United States Pony Clubs’ (USPC) Nationals and Festival, held at the prestigious Kentucky Horse Park.
According to Kristen’s father, Larry, his daughter competed with more than 1,300 athletes throughout the United States in one of the largest equestrian events of the year.
Kristen’s three-day competition was rigorous with points awarded for each phase based on times for running and swimming, accuracy for shooting, and accomplishment of the riding course with no penalties or time faults. In addition, Mr. Dukes added that constant evaluation of horse management and practices can also alter the overall score.
Kristen proudly placed sixth in the nation (with 2,691 total points) after placing first in the east region a few weeks earlier.
“I was happy with my performance at Nationals,” said a beaming Kristen. “My horse, Minnie, handled the jumps well and we had a solid trip. I didn’t shoot as well as I had in practice but it was still a decent phase. The athletes throughout the country are very strong so I am going to need to keep working to get better and move up again next year.”
Larry Dukes said that his daughter’s strengths are in the riding and swimming phases. “She trains on her family farm in Monkton and competes for the Elkridge-Harford Hunt & Pony Club and the John Carroll Equestrian Team.”
Mr. Dukes went on to say that the riding phase was problematic for Kristen as she had to ride her horse, Minnie in the Tetrathlon for the first time at the regional event and then at nationals due to a leg injury to her competition horse. “She sacrificed 200 points to jump lower obstacles and give her horse the experience to compete in future years,” he said.
Going into the swim phase, Kristen was in sixth place. Generally a sprinter, Kristen swam the middle distance freestyle event in 2:16.29 to capture the phase with 1,010 points to move into fourth place.
Dukes is coached in the pool by Sam Lapan, head coach for the Harford Hurricanes (USA and YMCA teams in Harford County) and the John Carroll Patriots.
“Every rider in the competition is a skilled equestrian athlete. They need to be solid in all phases but each needs a sport to separate them from their competitors. For Kristen, this is swimming,” said Coach Lapan.
The pistol shooting phase is typically an area where most teenagers have not had any training or experience. But Kristen was extremely fortunate to be trained by her uncle, Harry Russell, a deputy sheriff for Baltimore County and a nationally-ranked marksman with the pistol. Mr. Russell helped Kristen with the mechanics which in turn improved her accuracy to the target.
With such athleticism, commitment and determination, Kristen Dukes stands for the best in sportsmanship as well as horsemanship.