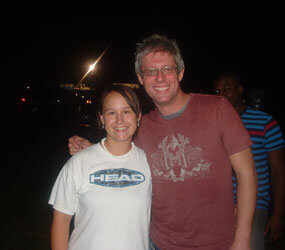 The amazing part is that Allison, a parishioner of St. Joan of Arc in Aberdeen, helped make this happen within two weeks. Maher was supposed to play two regional concerts, both of which were canceled. Allison learned Jan. 7 that Maher could come to John Carroll.

“It’s pretty much a six-month process crammed into two weeks,” Allison said. “The whole thing is pretty stressful, but it’s going to be worth it.”

Allison and her uncle, Steve Lozinak, had tried unsuccessfully for eight months to book Maher at John Carroll.

“There were so many times where I had to re-think my project,” Allison said. “I knew I wanted it to be something with Matt. During the last few months, I have been writing a book about my faith journey and how it’s affected me.”

Maher sang at John Carroll twice in 2007 and Steve Lozinak helped promote those appearances. The first was Allison’s initial exposure to Maher. She was in eighth grade and the fan of pop-rock music wasn’t too happy at the prospect of “church music” on a Friday night. She snuck in her iPod headphones.

“Eventually, I gave in,” she said. “It sounded like stuff I listen to. By the end of the night, I was hooked and I wanted to hear more.”

Allison estimates that she has seen Maher perform 15 times and has gotten to know the singer and his band as people after their performances.

“I just admire him more and more,” Allison said. “He’s just so positive and has such great messages in his music. He has really helped me a lot through his music.”

Allison is still writing her book, sure to have a happy ending, and has learned a valuable lesson in recent months.

“If you want something to happen and you work for it, it can happen,” Allison said. “If you want it to be big, then you can go big.”