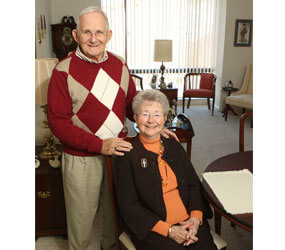 PARKVILLE – When John Gants broadcasts the morning weather report every Wednesday at Oak Crest Retirement Community, he covers a lot more than temperatures and precipitation.

Without fail, the 84-year-old parishioner of St. Ursula in Parkville spices up his closed-circuit TV appearances with some singing – borrowing tunes from the likes of Rod Stewart, Frank Sinatra and Nat King Cole.

Sitting in his Oak Crest apartment near his wife, Clarice, Gants beamed as he demonstrated one of his favorites.

“Un-forget–able,” Gants sang melodramatically, stretching out his arms for effect, “That’s what you are! Unforgettable. Though near or far!”

Before he could finish, Gants and his wife broke into laughter and looked at one another lovingly.

The Gantses are one of the best-known and most-loved couples at Oak Crest. They are involved in numerous activities and volunteer with Catholic ministries at the retirement community and St. Ursula.

John Gants recently helped raise money for charity by performing an award-winning Charleston routine with an Oak Crest staffer during a dance contest. He and his wife are extraordinary ministers of holy Communion at Oak Crest and St. Ursula. John Gants also lectors.

“We have faith because it’s the way we were brought up,” said Clarice Gants,

Clarice Gants remembered that her mother cared for the future Bishop Gossman when he suffered from tuberculosis as a youth.

“I don’t know how you can make it without faith,” John Gants said. “It’s what gets you through life.”

Clarice Gants is an 81-year-old graduate of Seton, while her husband graduated from Mount St. Joseph and Loyola.

“God has been good to us,” said John Gants, a co-founder of the Towson Golf and Country Club. “I think it’s God’s money. We want to give it back.”

As they prepare to celebrate their 60th wedding anniversary this July, the couple said good communication is key to a happy marriage.

“Never go to bed mad at one another,” he said. “Be true to each other.”

They have no plans of slowing down.

“We’ve been that way all our lives,” John Gants said. “We’re not going to change now.”