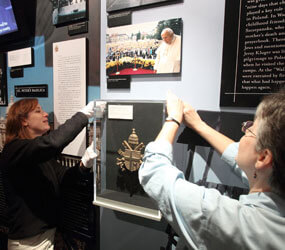 A few days before workers carefully unpacked transcripts, photos, prayer books and other items highlighting Pope John Paul II’s special friendship with the Jewish people, Karen Falk was hopeful the collection would inspire many to live out the pope’s call for interfaith understanding.

The items, on loan from Poland, Italy and Israel, will make up a landmark exhibition at the Jewish Museum of Maryland, opening Sept. 2 and running through Jan. 1.

“A Blessing to One Another: Pope John Paul II and the Jewish People” will be presented by the Jewish Museum, The Associated: Jewish Community Federation of Baltimore, the Baltimore Jewish Council and Catholic Charities.

“It’s important to us to be a bridge to other communities,” said Falk, curator of the Jewish Museum of Maryland, which is located at 15 Lloyd St. in Baltimore, just north of Little Italy.

Pope John Paul II holds a special place in the hearts of Jews, Falk said. The late pope grew up in the small Polish town of Wadowice, where he befriended many Jewish people.

“The exhibition does a beautiful job showing how the pope’s experiences growing up turned him into the person he became,” said Falk, noting that the exhibit’s photographic murals are particularly striking. “You leave feeling that you’ve gotten to know this pope as a person.”

The 1,500-square-foot exhibit, which has been featured in other cities around the country, is named for the pope’s 1993 commemoration of the 50th anniversary of the Warsaw Ghetto uprising. During the commemoration, John Paul called on Catholics and Jews to be a “blessing to one another.”

The exhibition includes video footage and interactive displays. Special programs, including one on the role of Catholic women religious during the Holocaust, will also be offered in connection with the exhibition.

“I’m excited about the programs and the opportunities for teachers,” said Ilene Dackman-Alon, program director of the Jewish Museum of Maryland. She noted that children from Catholic and Jewish schools will visit the exhibition, which was developed by Xavier University in partnership with the Hillel Center of Cincinnati and The Shtetl Foundation.

The advisory board included Cardinal William H. Keeler, retired Archbishop of Baltimore and moderator for Catholic-Jewish Relations for the U.S. Conference of Catholic Bishops.

“I’ve been involved in the Jewish-Catholic dialogue for a number of years,” said auxiliary Bishop Denis J. Madden, who served in the Middle East before coming to the Archdiocese of Baltimore. “Cardinal Keeler and the pope (John Paul II) are very much alike.

“When you have a genuine relationship with someone, you can address hard issues. If you don’t, you tiptoe around them. Cardinal Keeler could speak strongly, because everyone knows where he stands, in the sense that he has a great love for the Jewish community.”

William McCarthy Jr., executive director of Catholic Charities, said his outreach agency believes the exhibit recognizes the importance and relevance of the work of Pope John Paul II in reinforcing the bonds that exist between Catholics and Jews.

“Both are committed to improving lives and opportunities for people in our community because we value the dignity of all,” he said.

The Baltimore Jewish Times and The Catholic Review are media sponsors of the exhibition.