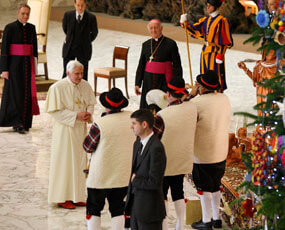 VATICAN CITY – With the birth of Jesus, God came to the world as a defenseless child to conquer human pride, violence and greed with his love, Pope Benedict XVI said.

“God conquers our hearts not by force, but by love, and thus teaches us the way to authentic freedom, peace and fulfillment,” he said during his general audience in the Vatican’s Paul VI hall Dec. 23.

The pope dedicated his audience talk to the importance of the mystery of Christ’s birth and the tradition of the Nativity scene.

St. Francis of Assisi was particularly devoted to the incarnation and “the God among us,” the pope said. The 13th-century saint wanted to recreate “the humble grandeur of the event of Jesus’ birth in a concrete, living and topical way and to communicate this joy to everyone,” he said.

During a visit in 1223 to the Italian town of Greccio to celebrate Christmas, St. Francis preached to the local residents at a mountainside grotto where he assembled a hay-filled manger and an ox and ass to represent the scene of Christ’s birth.

The people were so moved by the ceremony they went home with hearts “filled with ineffable joy,” the pope said.

Soon the tradition of recreating a Nativity scene representing the mystery of the Incarnation spread and became one of the most beautiful and intense parts of Christmas celebrations, he said.

The Nativity teaches believers to warmly welcome God’s message “and to love and adore Christ’s humanity,” he said.

While Easter celebrations focus on “the power of God which conquers death, ushers in a new life and teaches hope in the world to come,” the pope said, the Christmas creche helped give the Christian faith “a new dimension.”

St. Francis and his creche highlighted “the defenseless love of God, his humility and his harmlessness,” showing humanity that there is a new way to live one’s life and to love, he said.

God, by becoming man, could not ever be separated or secluded from the rest of humanity, said the pope.

“God is manifested in that baby as love; God came unarmed, without force because he did not intend to conquer from the outside, but intended instead to be freely welcomed by mankind” and to win people over with love and lead them to new life, he said.

“God became a defenseless child in order to conquer human pride, violence and the desire to possess,” he said.

The pope said the Nativity scene also shows the faithful how they can meet God and bask in his presence. As Jesus said, “Unless you change and become like children, you will never enter the kingdom of heaven,” so Jesus must be welcomed with the humble, simple heart of a child, the pope said.

At the end of his talk, the pope wished everyone a Merry Christmas in six languages and called on young people to be inspired by the Christmas season to generously serve others in their lives.